Spain and Italy close in on Euro 2020 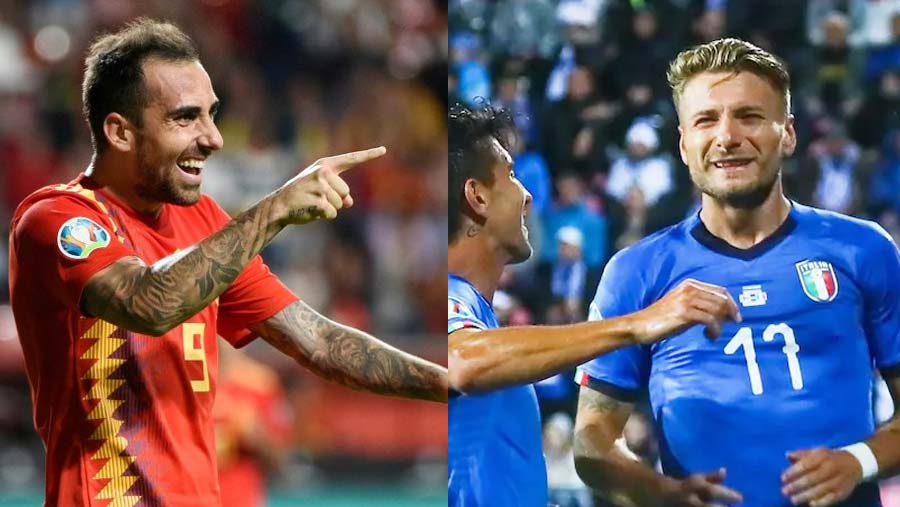 Spain and Italy moved to within touching distance of Euro 2020 on Sunday (Sep 8) after respective wins over the Faroe Islands and Finland saw them maintain their perfect qualifying records for next year’s tournament.

Rodrigo and Paco Alcacer both scored twice in an easy 4-0 victory over the Faroes in Gijon, on a night when captain Sergio Ramos equalled Iker Casillas’ national appearances record with his 167th cap.

It was their sixth win from six in Group F and put them on a perfect 18 points, seven clear of Sweden, who drew 1-1 with Scandinavian rivals Norway.

With two teams qualifying from the group, they are also a further point ahead of third-placed Romania following their 1-0 win over Malta.

The evening began in a sombre fashion with a minute’s silence in tribute to former coach Luis Enrique’s daughter Xana, who died of bone cancer aged nine last week.

Moreno, who took over as boss from Enrique when the ex-Barcelona coach stepped down in June, made 10 changes to the starting XI which won 2-1 in Romania on Thursday, with only Ramos keeping his place.

However the hosts wasted little time in taking the lead, Rodrigo tapping in despite suspicions of offside in the 13th minute following a defensive mix-up, and the Valencia striker put the game to bed five minutes after the break when he lashed a vicious left-footed strike into the top corner with the aid of a deflection.

Substitute Alcacer put the cherry on the cake with two goals in the dying moments, first slotting home from Thiago Alcantara’s low cross in the 90th minute before flicking in a near-post header to score his third Spain goal this week.

Italy also kept their 100 percent record thanks to Jorginho’s late penalty, which fired Italy their own sixth straight win, 2-1 at nearest rivals Finland.

Midfielder Jorginho’s 79th-minute winner in Tampere sent Roberto Mancini’s side six points clear of the second-placed Finns in Group J, after in-form Norwich City striker Teemu Pukki had levelled Ciro Immobile’s first Italy goal in two years with a penalty of his own six minutes before.

Four-time world champions Italy are flying high with a maximum 18 points with four qualifying games to play, nine points ahead of third-placed Armenia despite their thrilling 4-2 win over Bosnia and Herzegovina earlier on Sunday.

They could now secure qualification for the tournament, which kicks off in Rome next June, against Greece or Liechtenstein — who surprisingly drew 1-1 in Athens — next month.

Switzerland kept their hopes of qualifying from Group D alive with a 4-0 thumping of Gibraltar, who are yet to pick up a point or score a goal after five games.

Goals from Denis Zakaria, Admir Mehmedi, Ricardo Rodriguez and Mario Gavranovic were enough to move Vladimir Petkovic’s side to within three points of leaders Ireland.

They are also just a point away from second-placed Denmark, who could only manage a goalless draw at Georgia, and have a game in hand on both their rivals.

The Swiss’ fate could be decided in the next round of games next month, when they travel to Copenhagen to take on the Danes before hosting Ireland in Geneva.