PM urges BGMEA leaders to be watchful against propaganda 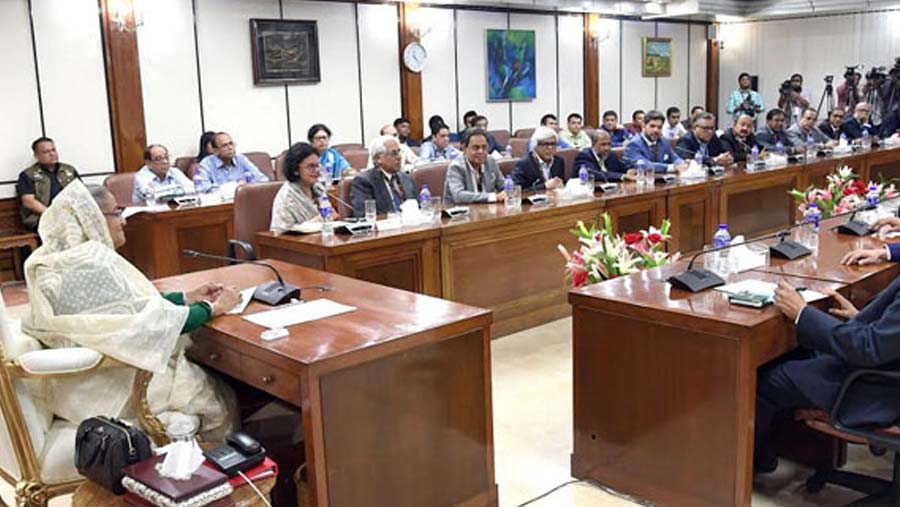 Prime Minister Sheikh Hasina today called upon the country’s businesspersons to stay alert against the propaganda now being carried out against the government as this is ultimately affecting the businesses.

“There are some people (in our country) who are out to conduct propaganda (against us) as part of their efforts to harm me politically. You (business community) should address it as you are being affected by it,” she said when a delegation of BGMEA called on her at the Prime Minister’s Office in Dhaka.

Mentioning that the garments sector has been playing a great role in the country’s development, the premier said, “You should give more importance to the diversification of products to boost exports further.”

Referring to a meeting held in London with Bangladeshi envoys stationed in the European countries, the Prime Minister said she had asked the envoys to explore new markets for the Bangladeshi products.

About the impact of Brexit on Bangladesh, she opined that Brexit will not hamper the business especially export of Bangladesh as the export related agreements with the foreign countries, particularly the European ones, will remain intact.

Newly elected leaders of Bangladesh Garment Manufacturers and Exporters Association (BGMEA), led by its president Dr Rubana Huq, met the PM at her office and put forwarded various demands before her.

Sheikh Hasina, also the Bangladesh Awami League president, said, “We are giving all possible facilities to the garments sector for its advancement as it has generated huge employments, particularly for women, and played a role in the country’s development.”

“We have also given necessary supports to resolve the problems of the backward linkage industry,” she added.

In this context, the PM said Father of the Nation Bangabandhu Sheikh Mujibur Rahman had initiated industrialization in the country.

She, however, asked the BGMEA leaders not to set up industries beside roads rather to build those in the industrial zones.