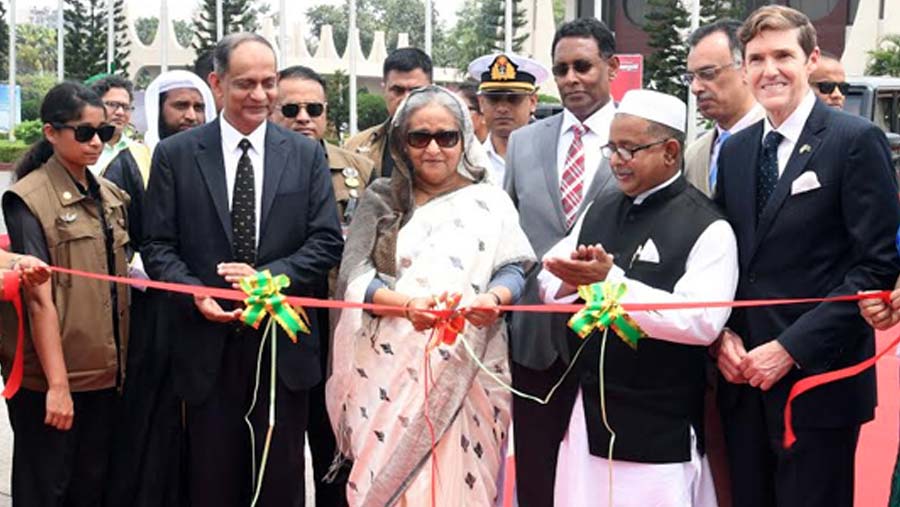 “The induction of Gaangchil into the Biman’s fleet is another milestone for the national flag carrier … it’s day of fulfilling the dream,” she told the induction ceremony of the state-of-the-art aircraft at the VVIP Terminal of Hazrat Shahjalal International Airport (HSIA) in Dhaka this afternoon, local media reported.

Earlier, the PM commissioned ‘Gangchil’ cutting a ribbon at the VVIP Tarmac of HSIA. After the inauguration, Sheikh Hasina boarded and inspected inside the aircraft and talked to its pilots and other crew members. A munajat was offered on the occasion, seeking continued peace, progress and prosperity of the nation.

Managing Director and CEO of Biman Captain Farhat Hasan Jamil delivered the welcome address. Ministers, advisers, parliament members and dignitaries were present at the function. US Ambassador to Bangladesh Earl R. Miller was also present at the ceremony.

Biman’s MD and CEO said ‘Gangchil’ will depart Dhaka for Abu Dhabi in its maiden flight at 5:30 p.m. today.

The third Boeing 787-8 Dreamliner, the 15th aircraft of the national flag carrier, was added to the Biman’s fleet on Jul 25. It landed at HISA directly from the USA’s Seattle’s Boeing Factory in the afternoon on the day.

Earlier, the first Boeing 787-8 Dreamliner, named as ‘Akash Beena’, arrived Dhaka in August last year, while the second one known as ‘Hangsabalaka’ arrived in December last.

The PM named all the Dreamliners, the sources said.