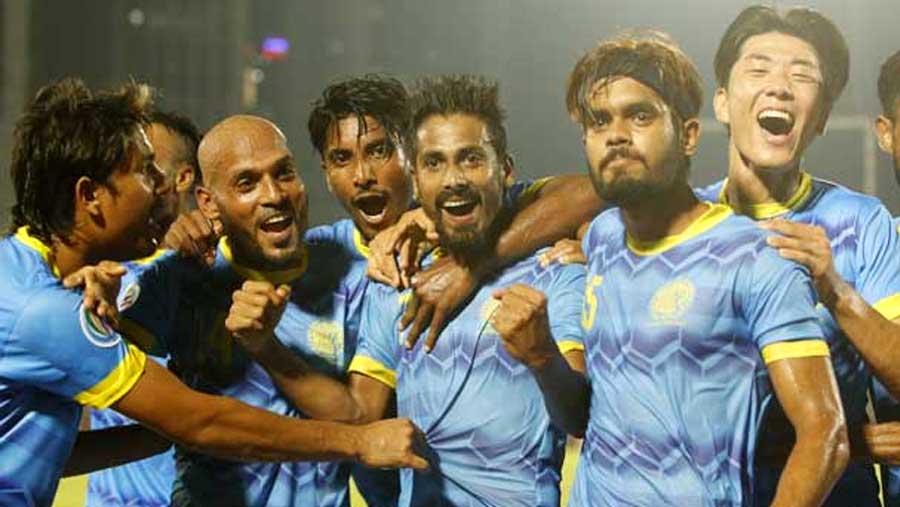 From the beginning of the match, both sides created some good chances with their attacking brand of football, but failed to manage any goal. In the  4th minute, a right-footed shot of forward Saad Uddin of Abahani missed the target while defender Mamun Miah also missed another close chance in the 11th minute for Abahani.

Defender Choe jong Hyok of April 25 SC came close to scoring in the 8th minute but spoiled the chance. In the 33rd minute, Dhaka Abahani broke the deadlock as Sohel Rana opened the account by a left-footed shot from the outside of the box, utilising a pass of Mohammad Nabib Newaz Ziban (1-0). But within just two minutes, the touring side equalised the margin as Choe Jong-Hyok scored the goal by a right-footed shot from outside, capitalising on a pass from his compatriot O Hyok Chol (1-1).

Dhaka Abahani put strong pressure on the visitors with their attacking brand of football. In the 37th minute, country’s national coloured booter Nabib Newaz Ziban scored the second goal for Abahani Limited, and his third of the competition, off a pass from veteran defender Waly Faisal (2-1).

After the first half, April 25 SC came alive and started their domination over the hosts. In the 54th minute, Rim Chol Min again levelled the margin for Korean side by a left-footed shot utilising a pass of substitute forward An Il-Bom (2-2).

Hosts side carried their domination and got quick success as Sunday Chizoba netted twice in a span of only four minutes. In the 57th minute, the Nigerian forward scored his third goal in the tournament utilising a pass from defender Tutul Hosain Badsha (3-2), and fourth goal in the 61st minute, off a Kervens Belfort pass (4-2).

April 25 SC got a relief while Pak Song Rok scored third goal by a good header from the centre of the box, off a corner of midfielder O Hyok Cholin the 77th minute (4-3).

Sohel Rana of Abahani was cautioned for rough charge.

Earlier, Dhaka Abahani sealed their place in the knockout phase for the first time as the winner of four-team Group E securing 13 points from six matches with four wins, one draw, and one defeat.

On the other hand, DPR Korea League champions April 25 SC reached for the third time the knockout phase of AFC Cup as Group I champions securing 15 points from six matches with five wins and one defeat.