Perpetrators of Aug 21 grenade attack will be punished: PM 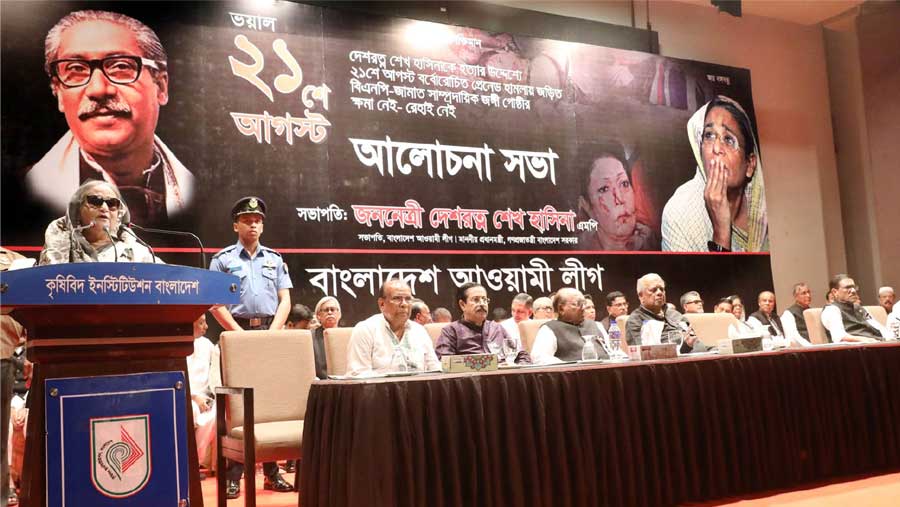 Accusing the past BNP-Jamaat government and Begum Khaleda Zia and her elder son Tarique Rahman of perpetrating the Aug 21, 2004 gruesome grenade attack on an Awami League rally in the capital, Prime Minister Sheikh Hasina on Wednesday (Aug 21)  asserted that punishment would be inflicted to those responsible for the heinous attack.

“It was not possible to carry out such attack without patronisation of the BNP-Jamaat government,” she said while addressing a memorial discussion marking the 15th anniversary of the Aug 21 grenade attack at Krishibid Institute of Bangladesh (KIB) in Dhaka, local media reported.

The premier went on saying that “It (the patronization of BNP-Jamaat in the grenade attack) has become a truth that was proved by evidences and we have got a verdict upon filing a case.”

The PM said that incidents of staging Joj Mia drama, destroying evidences of the grenade attack, barring the Awami League volunteers from going to the rooftops of adjoining buildings around the rally venue, subjecting the party leaders and activists to torture by charging batons and throwing teargas shells to help the attackers to flee from the scene and conducting an judicial inquiry bore testimony to evidences of BNP-Jamaat’s patronization in the grenade attack.

“Now, it will go to the higher court as death reference and we hoped to get the justice. Regrettably, the party leaders, workers and supporters who were killed in the attack would not return anymore,” she said.

Twenty-four people, including Bangladesh Mohila Awami League President Ivy Rahman, were killed and over 500 others suffered injuries in the attack and many of them became crippled for life, the primer said.

Though Sheikh Hasina narrowly escaped the attack, she lost her hearing ability due to the impact of the repeated grenade blasts near the truck-dais of the huge public rally.

A one minute silence was observed as a mark of profound respect to the memories of Father of the Nation Bangabandhu Sheikh Mujibur Rahman and other martyrs of the Aug 15, 1975 carnage, the four national leaders and the martyrs of the August 21, 2004 grenade attacks.

Recalling the sad memories of the grenade attack, Sheikh Hasina said, “I was not supposed to be alive escaping the attack and the then government even didn’t think so.”

“I know many incidents relating to the place where the attackers took shelter and from where the phone came to know whether I had been killed,” she said, adding, “Khaleda Zia might have kept the condolence message ready on my death.”

She referred to some remarks of Khaleda Zia and her party leaders and her son Tarique Zia staying in his father-in-law’s residence on Dhanmondi road No. 5 in the capital before the grisly grenade attack.

“Begum Zia had said that the Awami would not be able to go to power in next 100 years and I would never be the Prime Minister or even the leader of the opposition in future,” she said.

The PM posed a question if Tarique Zia lived in his father-in-law’s residence in Dhanmondi for 10 months consecutively to hatch conspiracy against her, saying, “Tarique left the house for their cantonment residence on August 1 (in 2004).”

In this connection, the prime minister requested the media to conduct an in-depth investigation into the matter to find out why Tarique Rahamn stayed in his father-in-law’s house for a long period.

“We were not allowed to utter a single word or discuss the matter in parliament. Even we were barred from bringing any motion in Jatiya Sangsad to condemn the attack. So it’s clear who were involved in this incident,” she continued.

Holding the BNP-Jamaat government responsible for destroying the evidence of the grenade attack, the premier said the attackers left the scene under the cover of the law enforcement agencies and they destroyed the unexploded grenades and helped the grenade suppliers leave the country.

“The attackers threw 13 grenades, 12 of which were exploded and one unexploded. Then the government destroyed the grenade and fired an army man from his job as he wanted to preserve the grenade (as evidence),” she said.

The government even washed out the place of occurrence to destroy the evidence, she said, adding that they brought prisoners from the jail in ambulance to carry out the attack as grenades were also found in Dhaka Central Jail.

Sheikh Hasina said efforts were not made to rescue the injured on Bangabandhu Avenue. Instead, the policemen lobbed teargas and resorted to baton charge to disperse those AL leaders and workers who came forward in aid of the injured, she said, adding the law enforcers also didn’t allow any vehicles to move around the scene.

The premier said Awami League arranged the rally in front of the party office on Aug 21, 2004 for peace and in protest against terrorist activities of the militants across the country including an attack on the then British high commissioner at the shrine of Hazrat Shahjalal (R) in Sylhet and killing a Chhatra League leader in Gopalganj.

Sheikh Hasina referred to some remarks of Khaleda Zia and her party leaders, staying of her son Tarique Zia in his father-in-law’s residence on Dhanmondi road No. 5 in the capital and planting of twin bombs – one weighing 76-kg and another 84-kg – in Kotalipara before the grisly grenade attack. She said: “Then the attack was carried out to kill me and eliminate the Awami League.”

The PM also said that even the BNP doctors did not attend the injured Awami League leaders and workers at the Dhaka Medical College Hospital and did not allow to admit the injured to Bangabandhu Sheikh Mujibur Rahman Medical University and Hospital (then PG Hospital).

“But, I took initiatives to rescue the injured and ensure their treatment through sending them to different hospitals,” she said.

The PM said the BNP ministers in parliament cut a joke falsifying “I carried the grenades in my vanity bag to stage the attack.”

Recalling the terrified scene of the grenade attack, Sheikh Hasina, who was then the leader of the opposition in parliament, said everything went wrong at the last moment as a photographer requested for a snap.

“Losing my eyeglasses it was also difficult for me to go for a shelter. But, Awami League leaders protected me creating a human shield around me and saved my life.”

The PM said not a single time, attempts on her life were made time and again.

She said there is no doubt that the Zia family was involved in the Aug 15 massacre in 1975 as Zia’s government rewarded the Bangabandhu’s killers by giving indemnity to them.

Sheikh Hasina said BNP is adept in spreading rumours and resorting to falsehood as the party spread at places, even to the children of the schools that “I hurled grenades by carrying those in my vanity bag, and that means I came to commit suicide.”

The PM, however, reiterated her commitment to do everything possible till her death to build a poverty and hunger free country as dreamt by Father of the Nation Bangabandhu Sheikh Mujibur Rahman.