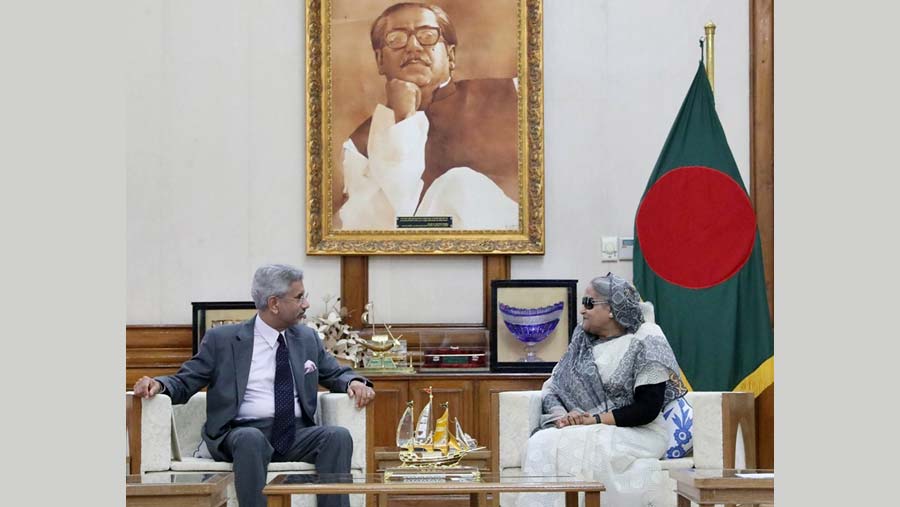 Indian Prime Minister Narendra Modi has formally invited his Bangladesh counterpart Sheikh Hasina for a bilateral official visit to India in the first week of October.

“Visiting Indian External Affairs Minister S Jaishankar handed over the invitation letter of Narendra Modi to Prime Minister Sheikh Hasina when he paid a courtesy call on the premier at her official Ganabhaban residence in Dhaka in the afternoon,” PM’s Press Secretary Ihsanul Karim said. Briefing reporters after the meeting, the press secretary said the PM extended her thanks to Modi for the invitation and greeted him, local media reported.

The Indian external affairs minister said relations between India and Bangladesh reached a new height during the last five years. He said understanding and collaboration in different sectors have enhanced significantly between the two countries during the period.

Putting emphasis on maintaining regular contact, Jaishankar said India is considering simplification of the process of visits of the people to each other’s countries. The Indian minister expressed his country’s interest in cooperation with Bangladesh in energy sector.

“Cooperation between the two countries in the field of hydroelectricity is possible effectively as its cost is less,” he remarked.

The PM said India can use Bangladesh’s Chattogram, Mongla and Paira ports for boosting trade and commerce.

The PM said Bangladesh and India have wonderful relations and have also excellent cooperation in different sectors.

“The Land Boundary Agreement (LBA) was concluded creating an example in the world … Indian all parties in parliament unanimously supported the LBA Bill,” he said.

Terming India as a true friend of Bangladesh, the premier said New Delhi is continuing support to Bangladesh since independence.

The Indian External Affairs Minister arrived Dhaka Monday night on a three-day official visit at the invitation of his Bangladesh counterpart Dr A K Abdul Momen. It is Jaishankar’s first Bangladesh visit after taking oath of office in Narendra Modi’s cabinet on May 30.