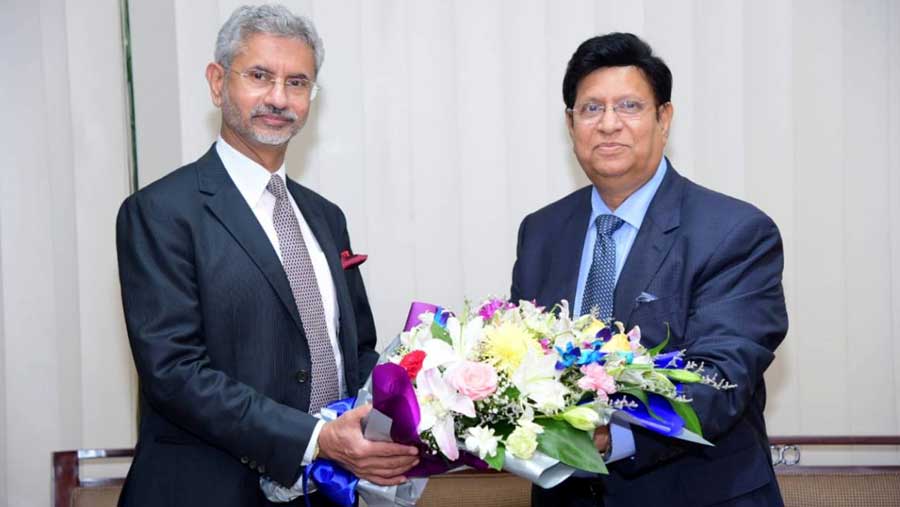 “This is my first visit in Dhaka as foreign minister. I look forward to very productive day tomorrow. We have a very good and strong relationship . . . many things to be discussed to take the bilateral relations to a higher level,” said S Jaishankar while talking to journalists at Hazrat Shahjalal International Airport.

According to the foreign ministry, the Indian External Affairs Minister will visit the Bangabandhu Museum at Dhanmondi on Tuesday morning to pay respect to Father of the Nation Bangabandhu Sheikh Mujibur Rahman.

Both Dr A K Abdul Momen and S Jaishankar will hold a bilateral meeting at the State Guest House Jamuna on the same day.

S Jaishankar is scheduled to call on Prime Minister Sheikh Hasina on the day.

Earlier on Jul 29, Momen said Jaishankar’s visit will be a courtesy trip. He said his Indian counterpart accepted his invitation to visit Bangladesh.

Bangladesh High Commissioner to India Syed Muazzem Ali called on the Indian foreign minister in New Delhi in July and conveyed him the Bangladesh Foreign Minister’s invitation to visit Bangladesh.

In June, Momen invited Jaishankar when he held first meeting with his new Indian counterpart on the sidelines of the 5th Conference on Interaction and Confidence Building Measures in Asia (CICA).

During the meeting, Jaishankar assured that he would visit Bangladesh at his convenient time.

It will be the S Jaishankar’s first Bangladesh visit after taking oath to office in Narendra Modi’s cabinet on May 30.

The 64-year-old had joined the Indian Foreign Service in 1977 and had stints as the high commissioner to Singapore and the ambassador to China and the US.

He is credited for helping resolve the Doklam stand-off through negotiations with China.

Earlier in 2007, he played a key role in negotiating the Indo-US civilian nuclear agreement that was signed by the UPA government.

After his retirements from the Indian foreign services in 2018, he had taken over as the Tata Group’s president of Global Corporate Affairs.

S Jaishankar was honoured with the Padma Shri Award by President Ram Nath Kovind in March this year.