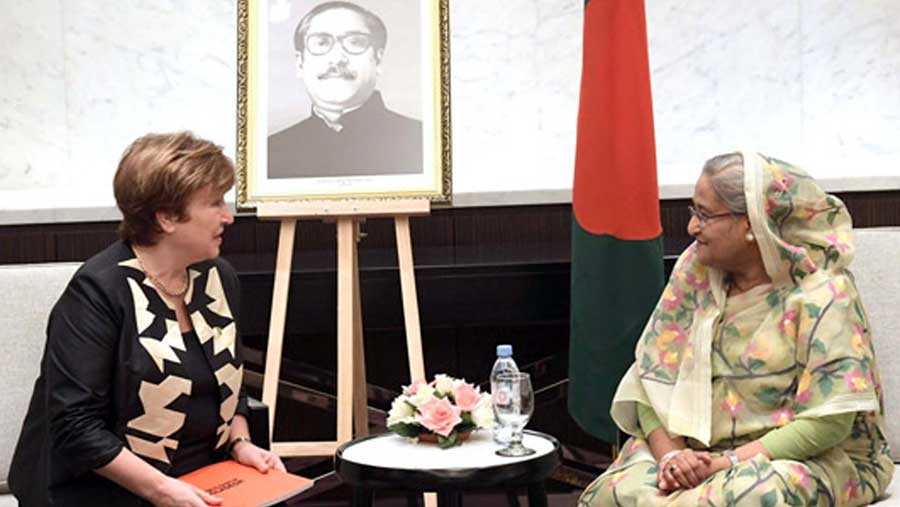 World Bank Chief Executive Officer (CEO) Kristalina Georgieva described Father of the Nation Bangabandhu Sheikh Mujibur Rahman and his family as the symbol of freedom and struggle for the entire world as she met Prime Minister Sheikh Hasina in Dhaka on Wedneday (Jul 10).

“Your family is a symbol of freedom and struggle for the entire word,” she was quoted as telling the Prime Minister during the meeting on the sidelines of the “Dhaka Meeting of the Global Commission on Adaptation”.

Georgieva said that she was a student during the Liberation War of 1971 when “Bangladesh achieved independence under the charismatic leadership of Bangabandhu.”

She also praised PM Sheikh Hasina as Bangladesh witnessed an all-round development, particularly in women empowerment and education, under her dynamic and visionary leadership. Bangladeshi girls are doing better than boys in education, she observed.

She said the Word Bank would continue its maximum support to Bangladesh through IDA for further development of the country.

The WB chief executive stressed the need for using waterways to develop regional connectivity for promoting trade and business.

She said Myanmar should initiate the return of the Rohingyas to their homeland, as they have been forcibly displaced from the Rakhine state.

During the meeting, the Prime Minister said Father of the Nation Bangabandhu Sheikh Mujibur Rahman had rebuilt the war-ravaged country immediately after the Liberation War of 1971 which she described as the “gigantic task.”

But all the development works were halted after the assassination of Bangabandhu on the fateful night of Aug 15 in 1975.

The premier said her government’s target is to fulfill five basic needs of the people - food, clothing, housing, health and education.

The premier gave credit to research works for gaining huge development in the agriculture sector.

She said her government brought down the poverty rate to 21 percent from 42 percent by taking pragmatic measures.