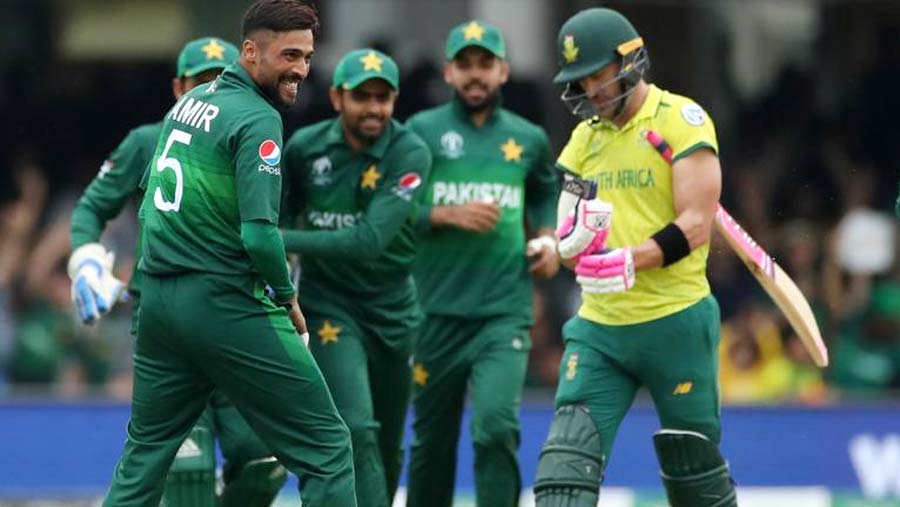 Pakistan condemned South Africa to World Cup elimination and kept alive their own slender chances of advancing to the semi-finals with a 49-run win at Lord’s on Sunday (Jun 22). Chasing 309 to remain in the hunt for a last four berth, South Africa’s survival bid petered out on 259-9.

South Africa were knocked out the World Cup as Pakistan inflicted a fifth defeat on the struggling Proteas to keep their own semi-final hopes alive.

In the must-win meeting, the 1992 champions won by 49 runs to register just their second win from six games.

Haris Sohail's entertaining 89 and 69 from Babar Azam saw Pakistan make 308-7 after they won the toss at Lord's.

Despite 63 from captain Faf du Plessis, South Africa never got up with the required rate and finished on 259-9.

Beaten semi-finalists in 2015, South Africa were ranked fourth coming into the tournament.

But a wretched showing, with just a solitary victory against Afghanistan to date, means they now have just pride to play for in their remaining two games, against Sri Lanka on Friday and Australia on Jul 6.

Pakistan, meanwhile, who have flitted between impressive and woeful in their six games so far, can still make the semi-finals themselves after climbing two places to seventh.

They may still need to win all three of their remaining games, starting against group leaders New Zealand at Edgbaston on Wednesday, and hope other results go their way.