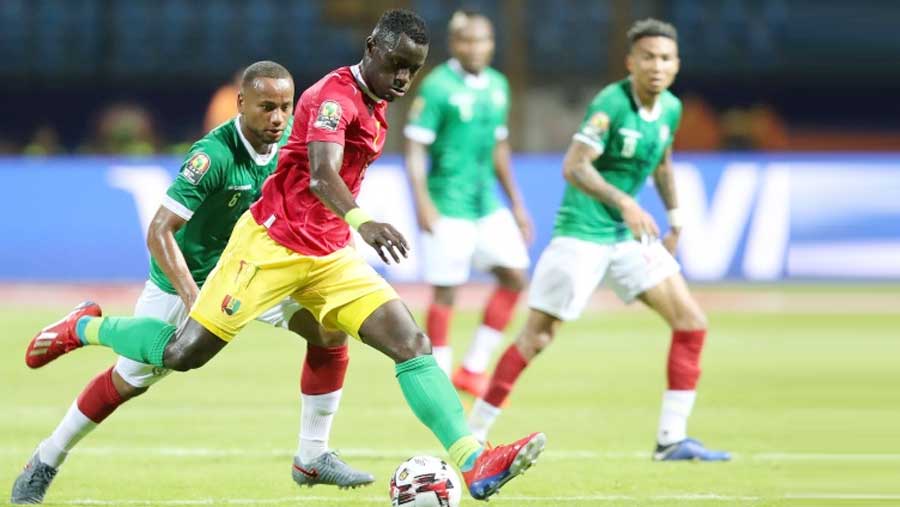 Africa Cup of Nations debutants Madagascar played out a thrilling 2-2 draw with Guinea in their tournament opener on Saturday (Jun 22).

Madagascar marked their Africa Cup of Nations debut with a draw against Group B opponents Guinea in Alexandria.

Sory Kaba had put Guinea ahead after 34 minutes, but Madagascar responded with two goals in six second-half minutes through Anicet Andrianantenaina and Charles Carolus Andriamahitsinoro.

Earlier on Saturday, Nigeria defeated Burundi 1-0 to top Group B.

Madagascar more than held their own in their first Africa Cup of Nations appearance, despite falling behind as Dijon striker Kaba latched on to Amadou Diawara's pass and calmly rounded goalkeeper Melvin Adrien.

The Madagascan players ran to celebrate with their coaching staff as Andrianantenaina headed in the nation's first-ever goal in the competition four minutes after half-time.

And Andriamahitsinoro completed the turnaround as he slotted in to the bottom left corner for Nicolas Dupuis' side - ranked 108 in the world.

Guinea coach Paul Put responded by bringing on Liverpool midfielder Naby Keita for his first appearance since May 1, after the 24-year-old sustained a thigh injury against F. C. Barcelona in the Champions League semi-final.

Metanire's poorly-timed tackle on Traore allowed Guinea - who failed to qualify in 2017 - a route back in to the match, and the 2015 quarter-finalists went close through Traore and Fulham's Ibrahima Cisse as they pressed for a late winner.

Guinea face Nigeria next on Wednesday, while Madagascar take on fellow debutants Burundi on Thursday.