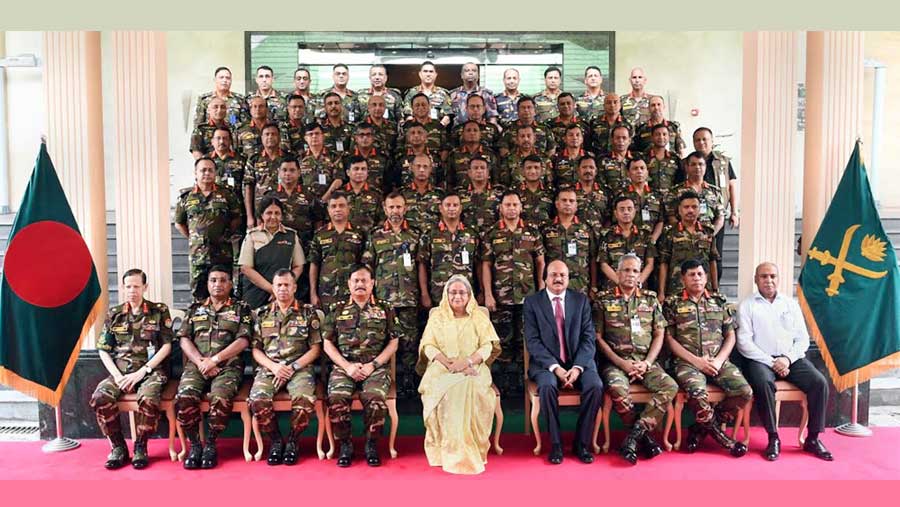 Prime Minister Sheikh Hasina on Sunday (Jun 16) asked the army to stand beside the people always by bestowing its leadership upon the competent and patriotic officers.

“The army will always stand beside the people. This is why the leadership will have to be bestowed upon qualified, competent and patriotic officers,” she said while addressing the inaugural function of the Army Selection Board, 2019 as the chief guest at Dhaka Cantonment in the morning. PM’s Press Secretary Ihsanul Karim briefed reporters after the function, local media reported.

The PM hoped that the selection board will recommend the army officials for promotion considering their qualities such as patriotism, belief in the spirit of the Liberation War, leadership quality, professional efficiency, discipline, honesty, trustworthiness and loyalty.

She said Father of the Nation Bangabandhu Sheikh Mujibur Rahman formulated the Defence Policy 1974. In light of the policy, the present government has formulated the Armed Forces Goal 2030 to build a strong armed force for the country.

Sheikh Hasina, the eldest daughter of Bangabandhu, said her government will complete the unaccomplished works of the Father of the Nation.

The premier said the government has relentlessly been working to turn the country into a ‘Shonar Bangla’ as dreamt by Father of the Nation by making Bangladesh a hunger and poverty-free country where no one will remain hungry.

Sheikh Hasina said her government has taken all effective measures for development, expansion and modernisation of the army.

The Forces Goal 2030 is now being executed aimed at enhancing professional excellence and human resources development of the armed forces, she added.

“I personally think myself as a Shebak (service provider) not Prime Minister,” she said, adding that her government wants to run the country as the people’s servant, not as ruler.

Describing becoming a developing country as an achievement, she said, “The country has achieved 8.13 percent GDP growth and targeted to achieve 8.2 percent growth in the FY 2019-2020. We will make double digit GDP growth in the days to come.”

She said, “The GDP growth will increase further once the mega projects are implemented.”

The government has given the biggest ever budget of Taka 5,23,190 crore in the FY 2019-2020 and Annual Development Programme of over Taka 2 lakh crore as part of the foresighted plan, she said.

“We have been preparing the plan for sector-wise development of the country since we were in the opposition,” she continued.

The premier stressed the need for proper implementation of the budget as the people will get the benefit of it, asking the authorities concerned to control the inflation rate with the rising trend of GDP growth.

She said: “There was always a 5 percent deficit in the budgets in the past and it had never crossed the limit.”

The people are now coming out of the poverty line due to huge development works to transform Bangladesh into a developed, prosperous and hunger-free country, the premier said, adding that five crore people have so far been brought under the Social Safety Net programme.

About her return to the country, the premier said, “I returned to the country in 1981 as the confidence and trust of the people in me are the main driving forces.”

“An adverse situation had been prevailing in the country when I returned home. As many as 19 coups had taken place after 1975,” she continued.

“The people lacked confidence when I had returned home. But that situation is not prevailing now,” she said.