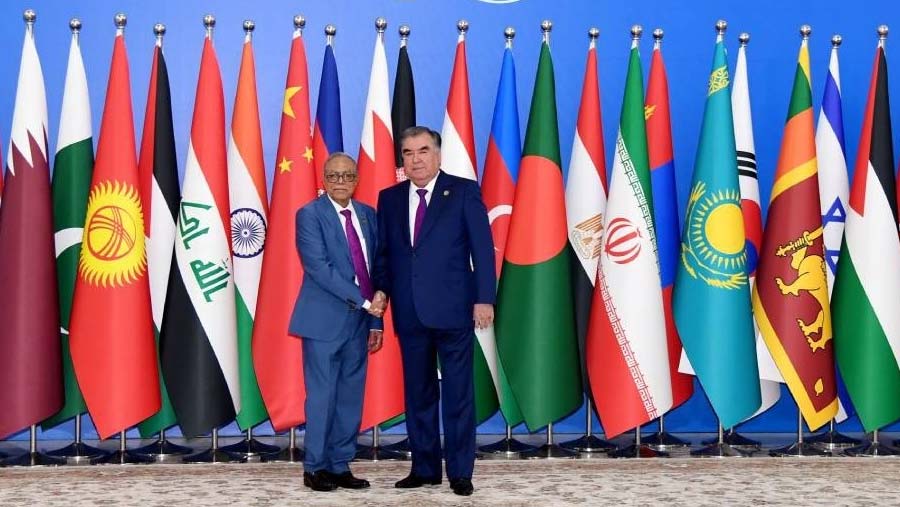 President Md. Abdul Hamid on Saturday (Jun 15) solicited support and cooperation from CICA partners to repatriate the forcibly displaced Rohingya people to their ancestral homeland of Myanmar with safety and dignity.

“Bangladesh hosts 1.1 million forcibly displaced Myanmar nationals . . . We seek a peaceful solution to the crisis and also signed instruments on their repatriation with Myanmar. (But) if it left unresolved, the crisis could destabilize the entire region,” he said.

The president was addressing the fifth summit of Conference on Interaction and Confidence Building Measures in Asia (CICA) at the Navruz Palace in Tajik capital of Dushanbe, reports said.

The head of the state highlighted Bangladesh’s position on Rohingya crisis, saying Bangladesh opened its door for Rohingya people, the worst victims of genocide and gross violation of human rights, which has been termed as a ‘text book example of ethnic cleansing’ and ‘humanitarian catastrophe of unmanageable magnitude’.

President Hamid said Rohingya people were forcibly displaced from their ancestral homes, adding that Bangladesh government extended the hand of cooperation to them on humanitarian ground after they (Rohingyas) sought shelter in the neighboring country.

Putting stress on working together in different issues in this region, the president said “We are facing a number of serious issues like violent extremism, international terrorism and forced migration which go beyond borders. So we need to coordinate our response to tackle those issues.”

The president said CICA, a multi-national forum established for enhancing cooperation to promote peace, security and stability in Asia, needs to enhance its capacity and collective efforts through promoting the concept of indivisible security to address these crucial challenges.

He called upon CICA member states to work together so that existing discords in the region should not impede resolving the issues related to security and cooperation in Asia.

“Stability and security in Asia is imperative for economic development … We can achieve that through dialogue and cooperation,” Hamid said.

Referring to Bangladesh’s foreign policy on the principle of ‘Friendship to all, malice to none’, adopted by Father of the Nation of Bangladesh Bangabandhu Sheikh Mujibur Rahman, he assured that Bangladesh would continue to uphold the noble principles and objectives of CICA.

In line with that principle, the president said, dynamic and visionary leader Prime Minister of Bangladesh Sheikh Hasina maintains relations with all external countries emphasizing on peace, stability and development.

“CICA is very relevant to us in this regard,” Hamid added.

Mentioning that CICA is now appearing to be an prominent actor in establishing regional security, President Hamid said Bangladesh proposes to strengthen its institutional capacity, inclusiveness and increase its cooperation in various fields.

Bangladesh will continue its efforts to be a partner to build a peaceful, stable and cooperative new Asia as CICA steps into its third decade, he hoped.

President of the Republic of Tajikistan Emomail Rahmon chaired the session of the summit while 39 representatives of different countries and international organisations, including Presidents of nine states, prime ministers of three countries and amir of Qatar attended it.

The main programme of the fifth CICA Summit formally began at 9:49 am (local time) as the theme of the summit is “Common vision for a secure and more prosperous CICA region”.

The CICA is a multi-national forum for enhancing cooperation towards promoting peace, security and stability in Asia.

The objectives of the CICA also include eradicating the menace of terrorism in all its forms and manifestations, combating illicit drug production and trafficking, and promoting trade and economic cooperation for the prosperity and stability in Asia.

Five international organizations, including the United Nations, International Organization for Migration (IOM), Organization for Security and Cooperation in Europe (OSCE), League of Arab States and Parliamentary Assembly of the Turkic Speaking Countries (TURKPA) are too associated with it.

The CICA member states cover about 90 percent of the territory and population of Asia.

Foreign Minister Dr. AK Abdul Momen, Secretary (Bilateral and Consular) Kamrul Ahsan and secretary to the President Sampad Barua, among others, were present at the session.