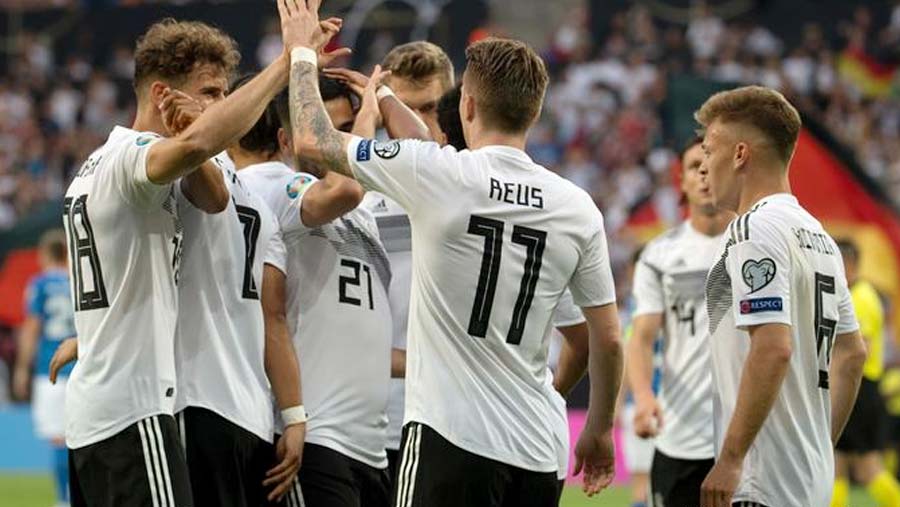 Marco Reus and Serge Gnabry starred with two goals apiece as Germany hammered Estonia 8-0 in Mainz on Tuesday (Jun 11) to maintain their 100 per cent start to UEFA Euro 2020 qualifying.

Germany smashed eight past Estonia to keep the pressure on Northern Ireland in Euro 2020 qualifying.

Marco Reus gave them a 10th-minute lead in Mainz with Leroy Sane setting up Serge Gnabry for a second. Leon Goretzka headed in, Ilkay Gundogan scored a penalty and Reus curled in a free-kick to make it 5-0 at half-time.

Gnabry and Timo Werner then scored before a late eighth from Gundogan's Manchester City team-mate Sane, who also had two goals disallowed.

Germany have won their opening three qualifiers, but remain three points behind Northern Ireland, who beat Belarus 1-0 to make it four wins from four.

They meet on Sep 9 in Belfast.

Group rivals the Netherlands were not in action as they were playing in the Nations League finals.

It was a quiet international break for Germany keeper Manuel Neuer, who only had to make a total of three saves against Belarus, in a 2-0 win on Saturday, and Estonia to keep two clean sheets.

Joachim Low's side have won their last 14 World Cup and European Championship qualifiers since losing 1-0 to the Republic of Ireland in 2015.