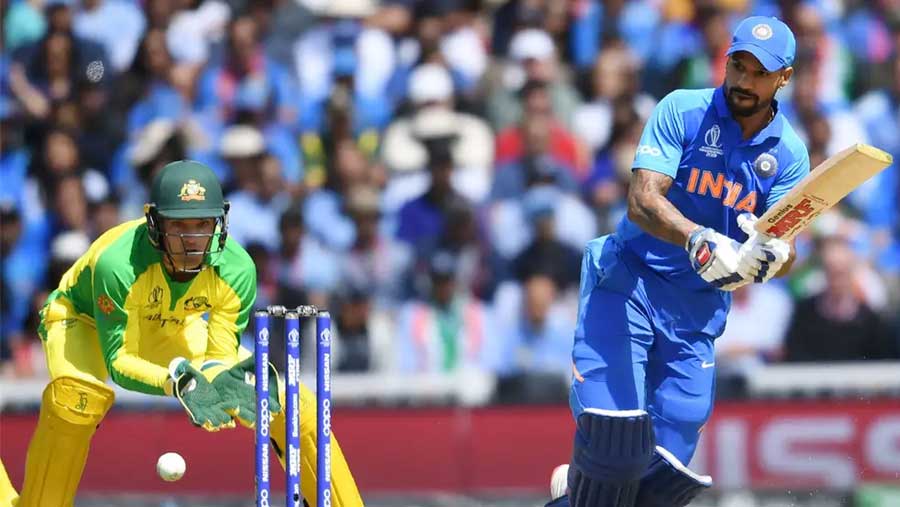 Opener Shikhar Dhawan hit a blazing century to set up a 36-run win over Australia in the World Cup on Sunday (Jun 9) as the reigning champions suffered their first defeat of this year’s tournament.

Dhawan’s 117 and his 127-run opening stand with Rohit Sharma laid the foundation for India posting 352 for five after captain Virat Kohli win the toss on a sunny London morning at the Oval. Kohli himself hit a brisk 82 and combined with Hardik Pandya for an 81-run third-wicket partnership that saw the pair pummel the Australian bowling attack.

India then dismissed Australia for 316 in 50 overs to record their second straight victory of this World Cup after an opening win over South Africa.

Half-centuries by David Warner and Steve Smith were not enough for the five-time champions whose record in the round-robin group stage now stands at two wins from three. Former captain Smith and Warner have both returned to international cricket in fine form after completing one-year bans for their part in a ball-tampering scandal.

Smith top-scored for Australia with 69 off 70 balls, while opener Warner made 56 but it never looked like being enough in the face of some tight bowling from Bhuvneshwar Kumar and Jasprit Bumrah, who took three wickets apiece.

Earlier, Dhawan and Sharma overcame a cautious start against Australia’s new-ball duo of Pat Cummins and Mitchell Starc to put India in control with their 16th century partnership in ODIs. Paceman Nathan Coulter-Nile finally struck in the 23rd over to have Sharma caught behind for 57 to get his first wicket of the World Cup.

Dhawan went on to reach his 17th ODI ton as he acknowledged the huge cheers from a largely India-supporting crowd. Starc had Dhawan caught at deep midwicket to end an innings featuring 16 boundaries.

Dhawan took no further part in the match as he nursed a blow to his thumb off Coulter-Nile that needed medical attention during his time at the crease. Kohli and all-rounder Pandya, pushed up the order, combined to good effect.

Kohli registered his 50th fifty at this level in an already illustrious career that has taken him to the top of the batting standings in both Test and ODI cricket. Pandya, who was dropped first ball by wicket-keeper Alex Carey, made the most of his reprieve to hit 48 runs off just 27 deliveries before falling to Cummins. MS Dhoni also chipped in with a brisk 27.

India’s total meant Australia were left needing to surpass Ireland’s 329 for seven against England in 2011, the highest score by any team batting second to win a World Cup match. They put up a spirited fight but the ever-increasing run-rate kept pulling them back.

Skipper Aaron Finch was run out for 36 while opening partner Warner survived an early scare when he edged a Bumrah delivery on to his stumps only for the bails to stay put. Warner got going with Smith to put on 72 runs for the second wicket but the left-hander fell to the guile of leg-spinner Yuzvendra Chahal.

Smith kept Australia in the hunt along with Usman Khawaja, who made 42. But Kumar saw off Smith as part of a double strike in the 40th over that also accounted for Marcus Stoinis.

Chahal got the dangerous Glenn Maxwell for 28 and the chase was all but over, although Carey’s unbeaten 55 did get Australia past 300.