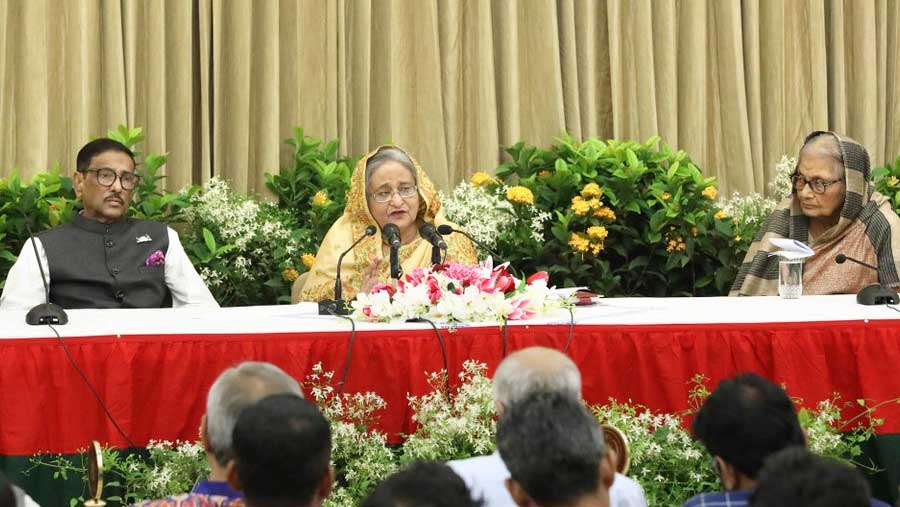 “This time, my visit to Japan, Saudi Arabia and Finland has been very fruitful in overall consideration,” she said in her written speech at a crowded press conference at Ganobhaban on Sunday (Jun 9).

In the speech, the PM highlighted the outcome of her tri-nation visit from May 28 to Jun 7.

In the first leg of her tour to Japan, Sheikh Hasina held bilateral a meeting with Prime Minister Shinzo Abe in Tokyo. At the meeting, the Japanese Prime Minister vowed to take the bilateral ties between Dhaka and Tokyo to a new height, while she elaborated the measures of her government for the repatriation of Rohingyas displaced from Myanmar.

In this regard, Shinzo Abe assured her of extending all-out cooperation in resolving the Rohingya crisis to ensure protection of forcibly evicted Rohingyas, she said.

The Prime Minister said the Japanese Prime Minister, expressing satisfaction over Bangladesh’s high growth, assured of standing by Dhaka towards in its endeavour to become a middle-income country by 2021 and achieving SDGs by the year of 2030.

Noting that Bangladesh shows a zero-tolerance policy against terrorism, Sheikh Hasina said she vowed to work together with the friendly countries like Japan in tackling this global problem.

She said she also highlighted her government’s investment-friendly policy as well as the steps of establishing 100 special economic zones and urged Shinzo Abe to encourage Japanese entrepreneurs to invest in those economic zones.

After the fruitful talks, Bangladesh and Japan signed the 40th ODA deal of US$2.5 billion under which four projects would be implemented in Bangladesh.

Apart from these, she joined a roundtable with the leading businessmen of both Japan and Bangladesh.

Besides, Sheikh Hasina attended the 25th International Conference on the Future Asia and delivered the speech as a keynote speaker as well as met family members of the Japanese nationals who were killed in the Holey Artisan Attack in 2016.

During the time, she conveyed her profound sympathy to the bereaved family members and assured them of ensuring justice.

About her visit to Saudi Arabia, the PM said she addressed the 14th Special OIC Summit held in Makkah on behalf of the Asia region.

In the speech, Sheikh Hasina said, she highlighted Rohingya problems and sought cooperation of the member states in resolving the crisis.

She urged the leaders attending the summit to undertake coordinated initiatives in overcoming various problems relating to maintaining peace and security, internal conflict, external interference as well as facing terrorism and militancy.

In the OIC Summit, the measures of Bangladesh were highly acclaimed time and again by the leaders for extending sympathy towards the Rohingya Muslims, saying the efforts of Bangladesh are examples to follow not only for the Muslim countries but also for the entire world, she said.

She said a united stand was taken from the OIC leaders at the ministerial level ad-hoc meeting to file case by Gambia at the international tribunal to realise just rights of the Rohingyas and bring the Myanmar authorities under proper accountability.

Sheikh Hasina said the issue was incorporated in the final communique of the summit and she urged the member states of the OIC to extend legal and financial cooperation towards the initiative, led by Gambia.

She also placed an action plan in finding ways to remove worldwide Islamophobia, ensure socio-economic development of the Muslim Ummah as well as advance various steps of cooperation, including in economic and commercial sectors among the OIC countries.

Besides, she strongly presented various steps and opinions of Bangladesh regarding implementation of the action plan formulated in the OIC-2025: Programme of Action.

In the last leg of her tri-nation visit, the Prime Minister went to Finland and held a meeting with Finnish President Sauli Niinisto at Helsinki.

During the meeting, they pledged to work together in facing the adverse impact of the climate change and resolving the Rohingya crisis.