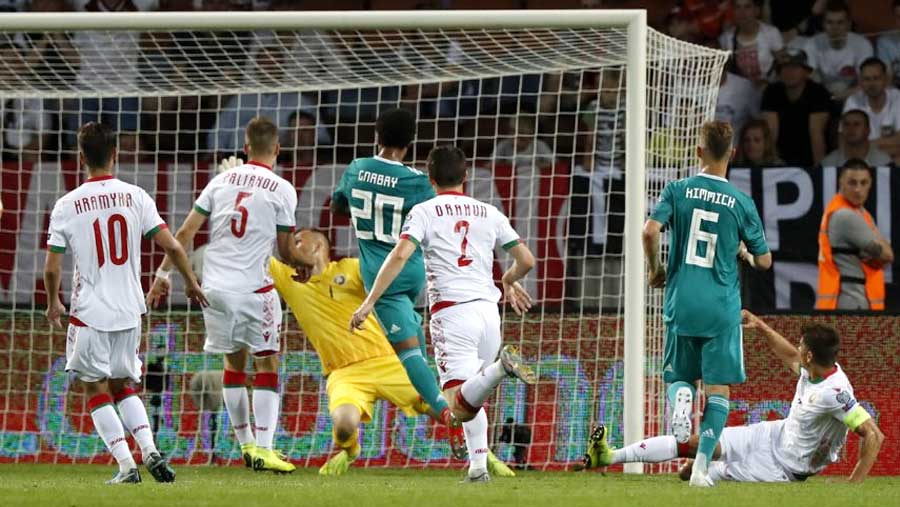 Germany eased past hosts Belarus 2-0 with goals from Leroy Sane and Marco Reus on Saturday (Jun 8) to make it two wins from their first two Euro 2020 Group C qualifiers.

Germany brushed off the absence of coach Joachim Loew to beat Belarus 2-0 on Saturday in European Championship qualifying, but remains behind fast-starting Northern Ireland in the standings.

With Loew sitting the game out after injuring himself in the gym, assistant Marcus Sorg took charge of a routine win with goals from Leroy Sane and Marco Reus. That kept Germany unbeaten in three games in 2019 after last year saw it eliminated in the World Cup group stage as defending champion.

Germany put Belarus under pressure from the start, and only two good reaction saves from Alexander Gutor stopped Serge Gnabry and Lukas Klostermann from scoring.

The Belarus defense struggled to track Sane's movement, and when he received the ball from Joshua Kimmich in the 13th minute, it was a simple matter to jink past defender Alexander Martynovich and stroke the ball into the far bottom corner.

Belarus tried to hit back, Nikita Naumov forcing a fine save from Manuel Neuer at a corner. Germany had chances to score a second but finishing was poor.

Reus eventually doubled the Germans' lead in the 62nd, charging through the static Belarus back line to knock in a pass from Matthias Ginter. Sane headed against the post in the 83rd.

Northern Ireland remains the surprise early leader in Group C after beating Estonia 2-1 and recording its first away win in nearly two years.

Substitutes Conor Washington and Josh Magennis scored in the 77th and 80th minutes respectively to overturn Estonia's early lead from a free-kick by veteran Konstantin Vassiljev.

Northern Ireland has won all its first three games as it tries to qualify for the European Championship for the second time, but has yet to play Germany or the Netherlands.