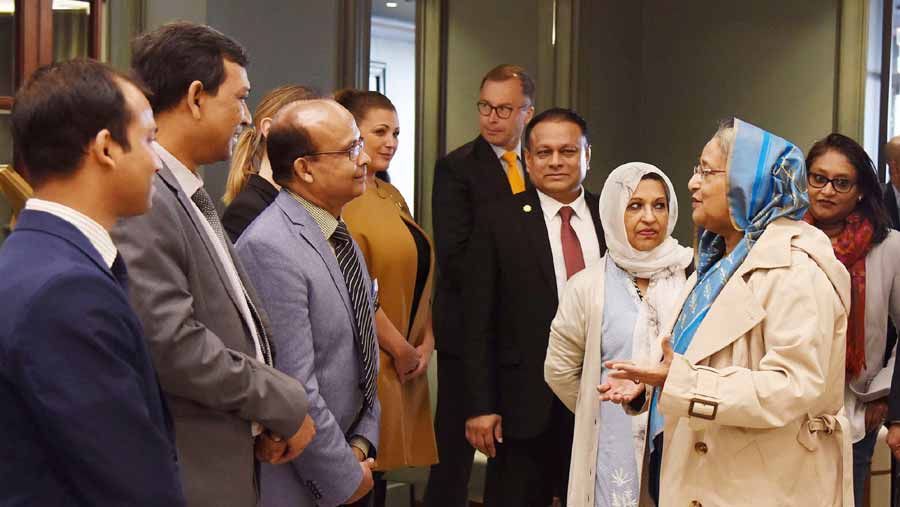 On her way to Helsinki, the PM made a nearly four-hour stopover at Frankfurt International Airport in Germany.

During her stay in Finland, Sheikh Hasina will have a meeting with Finnish President Sauli Niinisto on Jun 4.

The PM will leave Finland for home on Jun 7, and she is scheduled to reach Dhaka the next day.

On May 28, the PM left Dhaka for Tokyo, the first destination of her tri-nation visit to Japan, Saudi Arabia and Finland.

During her four-day stay in Japan, the two countries signed the 40th ODA deal involving US$ 2.5 billion after a bilateral meeting between Sheikh Hasina and her Japanese counterpart Shinzo Abe.

Besides, the premier attended the Nikkei International Conference on ‘The Future of Asia’ as a keynote speaker, joined a community reception accorded to her and attended a breakfast roundtable with Japanese business leaders.

On May 31, Sheikh Hasina left Japan for Saudi Arabia to attend the 14th OIC Summit 2019 held in Makkah.

During her three-day stay in Saudi Arabia, the PM attended the 14th session of the OIC’s Islamic Summit in Makkah, performed the holy Umrah in Makkah and offered Ziarat at the Rawza Mubarak of Great Prophet Hazrat Muhammad (PBUH) in Madina.