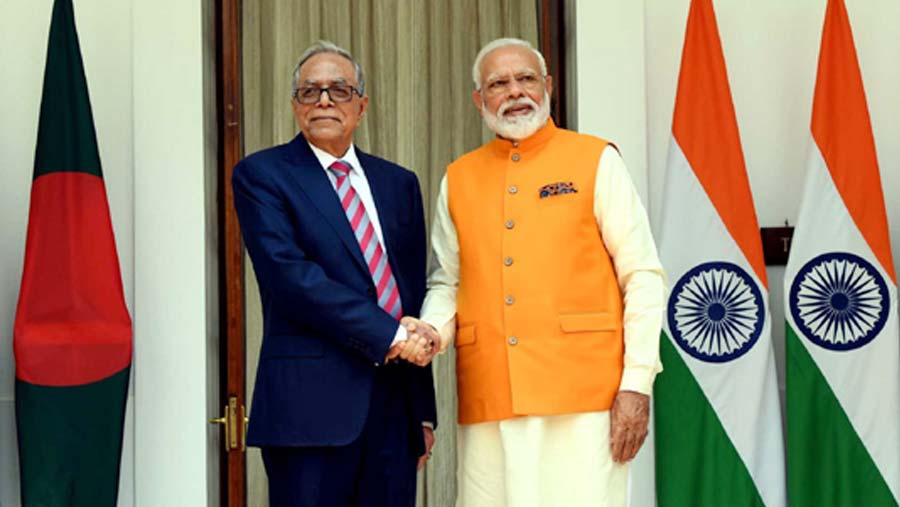 Indian Prime Minister Narendra Modi on Friday (May 31) assured that New Delhi’s cooperation in resolving the protracted Rohingya crisis in Bangladesh would continue as President Md. Abdul Hamid met him at Hyderabad House in New Delhi.

“We think Rohingya issue should be resolved as an urgent basis. So, we always speak about this in different international forums,” Modi told the Bangladesh President during the meeting.

The Indian PM said Rohingya issue is not a problem of Bangladesh alone rather it’s a serious threat to the whole South Asia.

Referring to the longstanding and historical bilateral and friendly relations between the two countries, Modi said India and its people are always beside of Bangladesh.

The Indian premier stressed on taking joint-programme for celebrating the golden jubilee of Bangladesh independence and the observance of birth centenary of Father of the Nation Bangabandhu Sheikh Mujibur Rahman.

“It will have a positive impact on bilateral and multilateral relations as well,” he mentioned.

During the meeting, President Hamid told Modi that the people of Bangladesh are waiting for long to see a settlement of Teesta water sharing issue.

India also wants to resolve the pending issue, Modi said, and called for activating and strengthening the joint-river commission in this regard.

The Indian PM mentioned that the partnership between Bangladesh and India was flourishing under the visionary leadership of Prime Minister Sheikh Hasina.

The President expressed his satisfaction over the excellent bilateral relations that exist between the two countries, saying that the ties have grown and prospered, especially under the statesmanship of Prime Minister Sheikh Hasina and Prime Minister Narendra Modi.

Congratulating Modi for being the prime minister his second consecutive term through a landslide victory, President Hamid said, “The people of India have reposed their trust in your leadership and I am certain that you will be able to deliver with great success in your second term.”

The President conveyed best regards of Bangladesh Prime Minister Sheikh Hasina saying that she regretted as she could not attend the swearing-in ceremony due to her other commitments.

“She (Sheikh Hasina), however, looks forward to receiving you in Bangladesh at an early date,” he added.

The President said Bangladesh and India have witnessed remarkable progress in the past five years on cooperation in many areas, especially security, power, trade and commerce, energy, connectivity, infrastructure development, culture, people-to-people contact, renewable energy, blue economy and maritime cooperation and peaceful use of nuclear energy.

Referring to the terrorism and militancy in all forms, he said Bangladesh showed ‘zero tolerance’ policy against terrorism and violent extremism and does not allow its territory to be used by any terrorist individual, group or entity against any state or people.

The head of the state hoped that Bangladesh and Indian government would move forward with their common aspirations for further consolidating their relation and settlement of all outstanding issues between the two countries.

The Indian PM further assured him of looking forward to work together to resolve all outstanding and unsettled issues in the days to come.

Modi expressed his heartfelt gratitude to President Hamid for attending the oath-taking ceremony at Hyderabad House.

President Hamid arrived in New Delhi on Wednesday on a three-day visit to attend the swearing-in ceremony of the Indian premier held on Thursday evening.