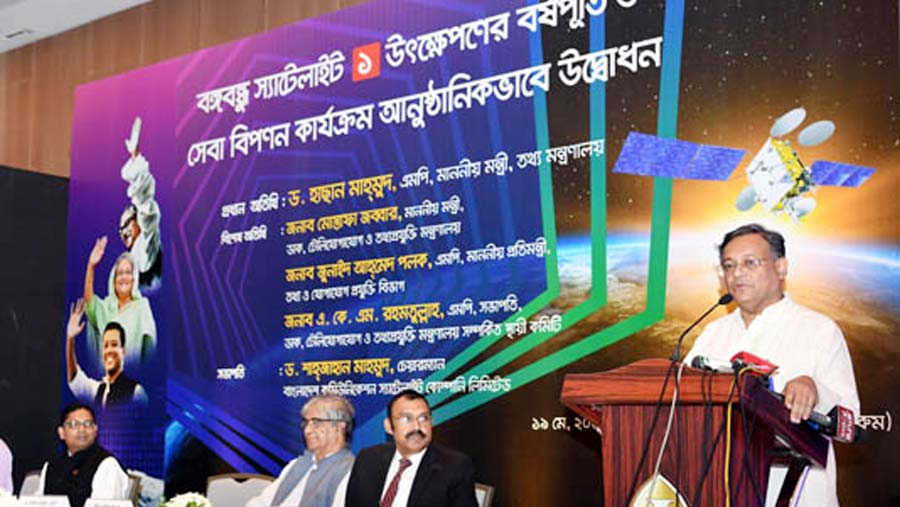 Information Minister Dr Hasan Mahmud on Sunday (May 19) said the concept of ‘Digital Bangladesh’ is now not a dream, but a reality though it was beyond the imagination of the people when Bangladesh Awami League incorporated the concept in its election manifesto before the general election of 2008.

“When we mentioned about the concept of digital Bangladesh in our election manifesto in 2008, many people made fun with it. Now it is not a dream, but a reality,” he said.

The minister was addressing the first launching anniversary of the country’s first communication satellite Bangabandhu Satellite-1 (BS-1) and formal inaugural function of satellite as the chief guest at InterContinental hotel in the city.

Dr Hasan said the number of internet users in 2009 was about 40 lakh in the country which now stood at 9.15 crore.

The total concept of Digital Bangladesh was came from Information and Communication Technology Affairs Adviser to the Prime Minister Sajeeb Wazed Joy, the minister said adding that Prime Minister Sheikh Hasina is now implementing it.

‘Bangabandhu Satellite-1’ is a milestone on the way of building Sheikh Hasina’s ‘Digital Bangladesh’ with a pledge to build ‘Sonar Bangla’ as dreamt by Father of the Nation Bangabandhu Sheikh Mujibur Rahman, he said.

The prime minister is implanting the dreams which she showed the countrymen, Hasan said, adding, “We can exceed our dream, if we could work together with sincerity”. Exceed

Earlier, people of the country had faced interruption in internet service during natural calamities, but the BS-1 will ensure uninterrupted internet service in any situation, the minister said. After successful launching of the BS-1, the government is now working on BS-2, he added.

Zunaid Ahmed Palak said as per the government target of bringing all the unions of the country under the internet service by 2021, the unions in remote areas, where getting internet connection is not possible through optical fiber, will be brought under the service.

He also said that the cost of the BS-1 will be realized by the first seven or eight years.

Information Secretary Abdul Malek and ICT division secretary and other officials concerned were present in the function.

Earlier, the information minister distributed prizes among the winners of essay competition marking the first launching anniversary of the BS-1 and formal inauguration of commercial operation of the satellite.

In the ceremony, the BCSCL also signed a memorandum of understanding with state owned Sonali Bank to provide connectivity from BS-1.