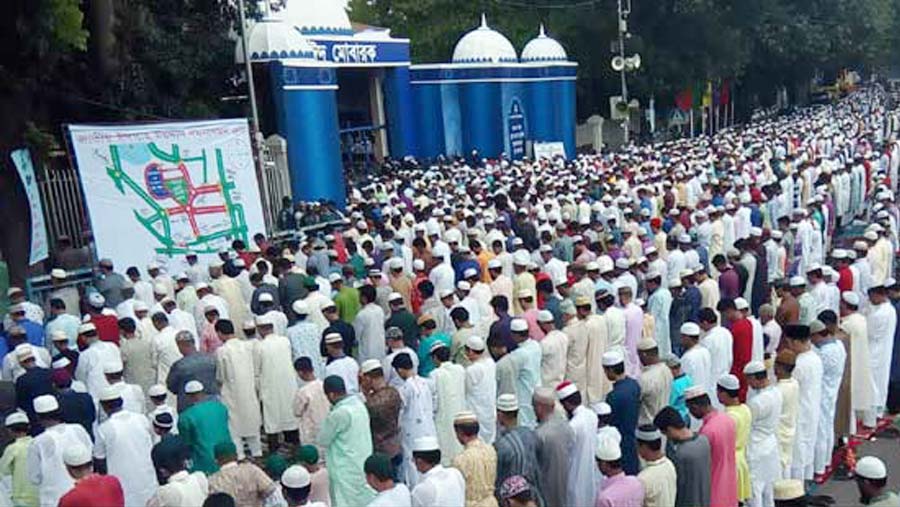 The main congregation of Eid-ul-Fitr will be held at the National Eidgah on the High Court premises at 8:30 a.m on the Eid day. In case of inclement weather, the Jamaat will be held at Baitul Mukarram National Mosque at 9 a.m.

Tight security will be in place to ensure security of devotees at the National Eidgah, the meeting was told.

The meeting decided to hoist national flag atop all the establishments of government, semi-government, autonomous, private and armed forces buildings on the Eid day. It also decided to display banners with ‘Eid Mubarak’ on different important traffic islands and light posts in the city.

Besides, important government and military establishments will be illuminated at night. Improved diets will be served among the inmates of hospitals, jails, Shishu Paribars, orphanages and vagrant welfare centers of the city and district.

President and Prime Minister will give their messages on the occasion of the holy Eid-ul-Fitr.

Special measures will be taken to maintain law and order to avert any kind of untoward situation in the country. Bangladesh Television, Bangladesh Betar and other private channels will air special programmes and news papers will publish special supplement highlighting significance of Eid-ul-Fitr.

Bangladesh embassy and missions will celebrate Eid-ul-Fitr with due religious fervor and zeal.

It is also decided that documentary films and cinemas will be displayed as per the government policy in various halls and places in the city.

Bangladesh Shishu Academy will organize Eid reunion function for the children. All deprived children will be able to enter in the amusement parks under the Dhaka South City Corporation and Dhaka North City Corporation without ticket during the Eid day.

High officials and representatives of the President’s Office and cabinet division, concerned ministries, Islamic Foundation, Dhaka Metropolitan Police and other organizations were present in the meeting.