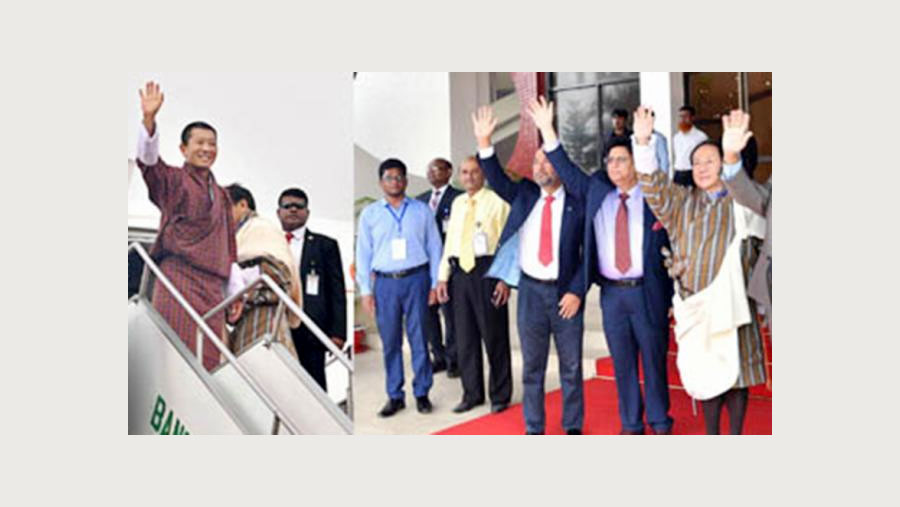 Dr Lotay, who is also an alumni of Mymensingh Medical College, made his maiden visit at the invitation of Bangladesh Prime Minister Sheikh Hasina, after taking his office as Bhutan Prime Minister last year.

During the visit, the official talks between Bangladesh and Bhutan, led by the two prime ministers, were held on Saturday at the Prime Minister Office in an atmosphere of great warmth and cordiality reflecting the excellent bilateral relations and age-old friendship between the two countries.

Bangladesh and Bhutan agreed in principle to work on allowing duty free and quota free access of a number of their products to each other’s market for the mutual interests.

“Bhutan has sought duty and quota free access of its 16 products to Bangladesh market, while Bangladesh has sought such access of its 10 goods to Bhutanese market during the official talks of the two countries,” Foreign Secretary Shahidul Haque said while briefing reporters after the talks between the two primers on Saturday.

The two leaders expressed satisfaction at the excellent state of bilateral relations whose strong foundations were laid by Father of the Nation Bangabandhu Sheikh Mujibur Rahman and His Majesty Jigme Dorji Wangchuck.

The two prime ministers recognised the new heights of the bilateral relations that have reached in the last decade under the leadership of the two countries and reaffirmed their commitment to further strengthen and consolidate the relations between Bangladesh and Bhutan.

After the bilateral talks, Bangladesh and Bhutan have signed five instruments on strengthening their cooperation in the areas of health, agriculture, shipping, tourism and public administration training.

He also held meeting with the leaders of FBCCI where he said Bhutan is highly keen to develop the existing trade relations with Bangladesh and also wants to explore the trade potentials. The Bhutanese PM also joined one of the Bangalee New Year celebration programmes to greet the countrymen in the capital.

During the visit that started on Friday, Dr Lotay spent half of that day at Mymensingh Medical College and Hospital from where he had received his MBBS degree under foreign student quota.