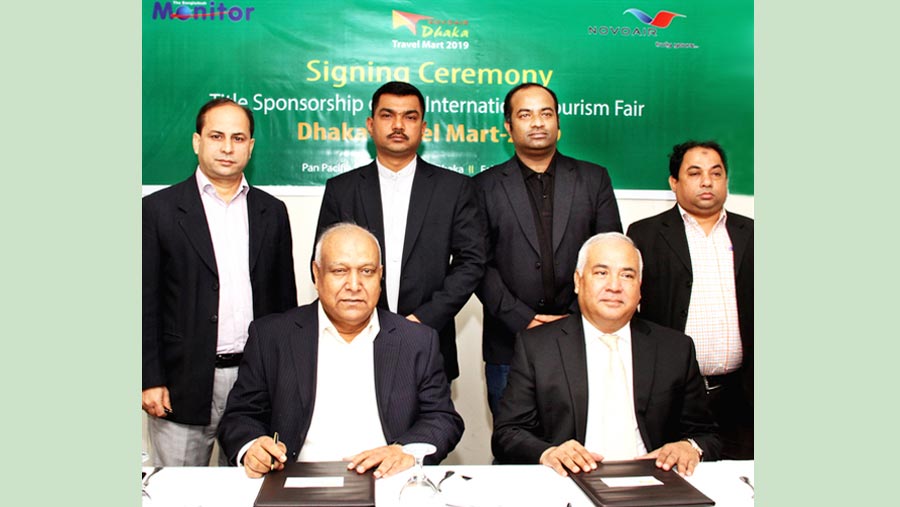 NOVOAIR, one of the leading private airlines in Bangladesh, is going to support the 16th edition of the international tourism fair - Dhaka Travel Mart 2019 as the title sponsor. To be titled as NOVOAIR Dhaka Travel Mart 2019, the fair is being organised by The Bangladesh Monitor, premier English fortnightly on aviation and tourism.

Mofizur Rahman, Managing Director of NOVOAIR and Kazi Wahidul Alam, Editor of The Bangladesh Monitor signed a MoU to this effect at a ceremony, held at Pan Pacific Sonargaon Hotel Dhaka on Saturday (Feb 2). Senior officials from both the organisations were present on the occasion.

Mofizur Rahman Said, “We are proud to be associated with the biggest tourism extravaganza of the country. NOVOAIR has constantly been trying to play its role in the development of Bangladesh’s tourism sector.”

Thanking NOVOAIR for their support to Dhaka Travel Mart Kazi Wahidul Alam said, “Over the years Dhaka Travel Mart has been established itself as an effective platform for direct interaction between the tourism business organisations and the customers. To meet the customers’ demand this specific sector is constantly evolving, adding new products and features.’’

NOVOAIR Dhaka Travel Mart 2019 will be held from Mar 21-23 at the Ball Room of Pan Pacific Sonargaon Hotel Dhaka. National tourism organisations, airlines, tour operators, hotels, resorts and other tourism related organisations from home and abroad will showcase their products and services in over 80 stalls and pavilions during the fair.