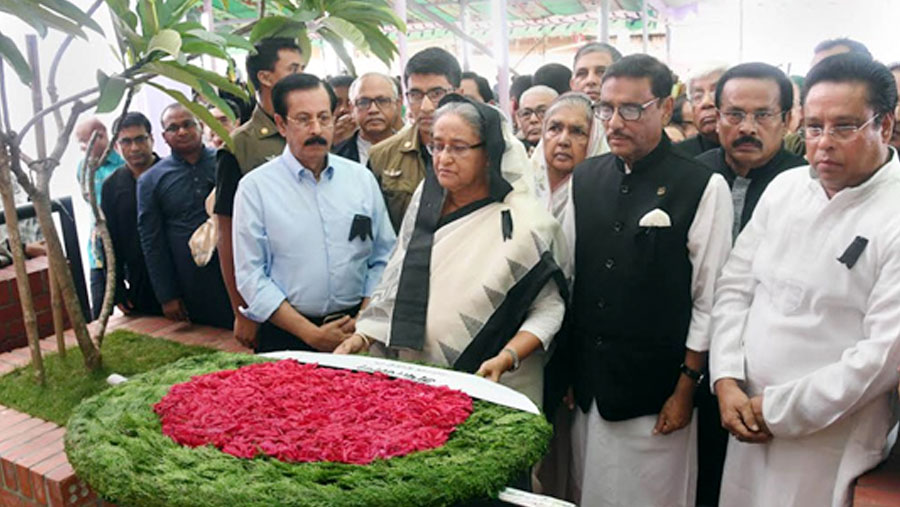 The nation today recalled the savage Aug 21 grenade attack of 2004 with a heavy heart paying homage to the martyrs of the carnage.

Marking the 14th anniversary of the grenade attack on a Bangladesh Awami League rally, the ruling Awami League, its associate bodies and its left-leaning allies, and other political parties, social-cultural and professional organisations placed wreaths at the temporary memorial erected on the spot of the occurrence at Bangabandhu Avenue in the city paying deep homage to the martyrs.

Prime Minister Sheikh Hasina first placed a wreath at the memorial and then flanked by leaders of Awami League, she, as president of the party, placed another wreath.

Cabinet members, PM’s advisors, senior leaders of Awami League and 14-party combine and family members of the martyrs and those injured in the incident were present.

A one minute silence was observed in memory of those killed in the grenade attack while a munajat was also offered seeking eternal peace of the departed souls.

On Aug 21 in 2004, the gruesome grenade attack was launched on an anti-terrorism public rally of Awami League at Bangabandhu Avenue in the capital during the rule of BNP-Jamaat alliance government aiming to eliminate the party leadership. The then opposition leader and incumbent Prime Minister Sheikh Hasina and other front-ranking leaders of Awami League escaped the carnage. But 24 leaders and workers of Awami League, its associate bodies including the then Mahila Awami League President Ivy Rahman, wife of late President Zillur Rahman, were killed.

About 400 others suffered splinter injuries in the attack and many of them became crippled for life.

Awami League leaders including the then mayor of Dhaka City late Mohammad Hanif and the leader of the opposition Sheikh Hasina’s personal security squad saved their party chief forming a human shield.