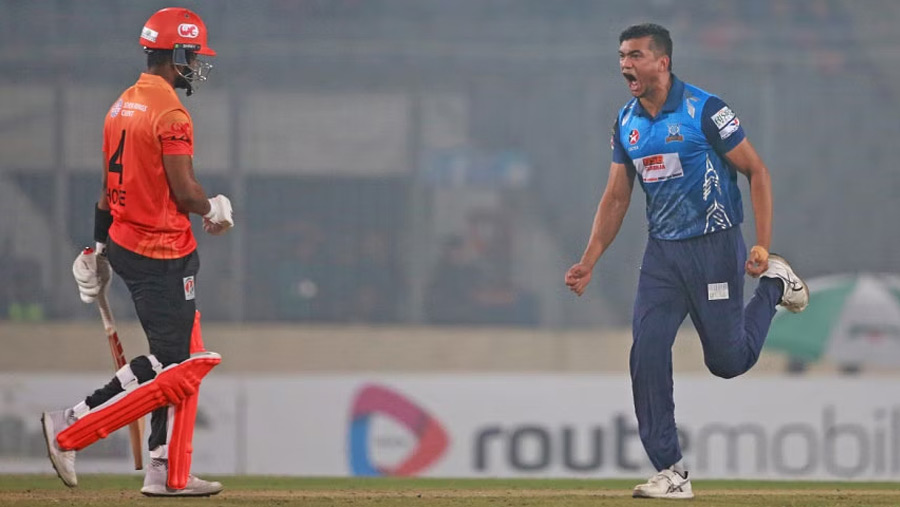 Dhaka Dominators successfully defended the third-lowest total in the Bangladesh Premier League (BPL) T20 to clinch a scintillating 24-run win over Khulna Tigers in the second match of Tuesday (Jan 24) at the Sher-e-Bangla National Cricket Stadium in Mirpur.

After posting a low 108-run total in 19.4 overs, Dhaka pacer Taskin Ahmed ran riot, picking up four wickets for just nine runs in his 3.3 overs to help his side bundle out Khulna for 84 runs in 15.3 overs.

In a dramatic turn of events, Khulna went from 58 for three in 10 overs to losing their next seven wickets in a span of just 33 deliveries as Dhaka registered their second win from eight games.

Tamim Iqbal top-scored with a 23-ball 30 while skipper Yasir Ali added 21 off 24 while no other Khulna batters were able to reach double-figure.

Earlier, Khulna's off-spinner Nahidul Islam registered incredible figures of four for six in his four overs – the bowler's career-best T20 figures and also the most economical figure in BPL history – to dismantle the Dhaka top order. Nahidul also bowled two maidens in his spell, making him only the fourth bowler to do so in the BPL.

Opener Soumya Sarkar returned amongst the runs, scoring 57 off 45 balls. The left-handed opener hit six fours and two sixes. However, no other Dhaka batters were able to make an impact.