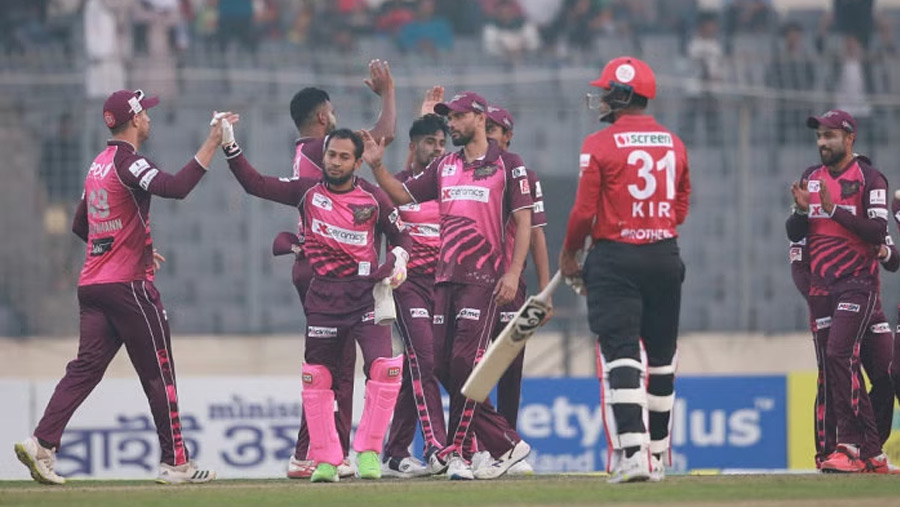 Sylhet Strikers held on to a two-run win against Fortune Barishal in a thrilling Bangladesh Premier League (BPL) match at the Sher-e-Bangla National Cricket Stadium in Mirpur on Tuesday (Jan 24).

Batted first, Sylhet posted a solid total of 173/5 in their 20 overs thanks to Najmul Hossain Shanto's match-winning 89 off 66 balls.

The Mashrafe Mortaza-led side didn't have the brightest of starts though. They lost three quick wickets inside the first two overs, to specify, in one over of Mohammad Wasim. Two of their first four batters – Zakir Hasan and Mushfiqur Rahim – were dismissed for a golden duck while Towhid Hridoy scored only four.

However, Shanto remained calm on the other end. He started off slowly but once he got pace, there was no stopping him.

For Barishal, Mohammad Wasim bagged three wickets while Shakib Al Hasan and Mahmudullah picked up a wicket each.

Barishal had a fine start in their pursuit of 174 runs. Saif Hassan struck four maximums before departing for 31 off 19 balls. Ibrahim Zadran and Shakib tried hard but Barishal kept losing wickets in important moments. Zadran was dismissed in the 14th over when they needed 68 runs. Shakib followed him in the same over.

Karim Janat was looking threatening for Sylhet but his 21-run innings from 12 balls went in vain.

The nail-bitting match went into the last over with Sylhet needing 15 to win and they had Iftikhar Ahmed and Mehidy Hasan Miraz on the crease. But both the batters got dismissed in successive deliveries. And Barishal needed 15 off four.

Barishal looked all defeated until Mohammad Wasim came in and played a 10-run cameo off four balls. However, that wasn't just enough.

The win takes Sylhet one step closer to the playoffs with 12 points while Barishal remain second with 10.