Lazio thump Milan to move up to third 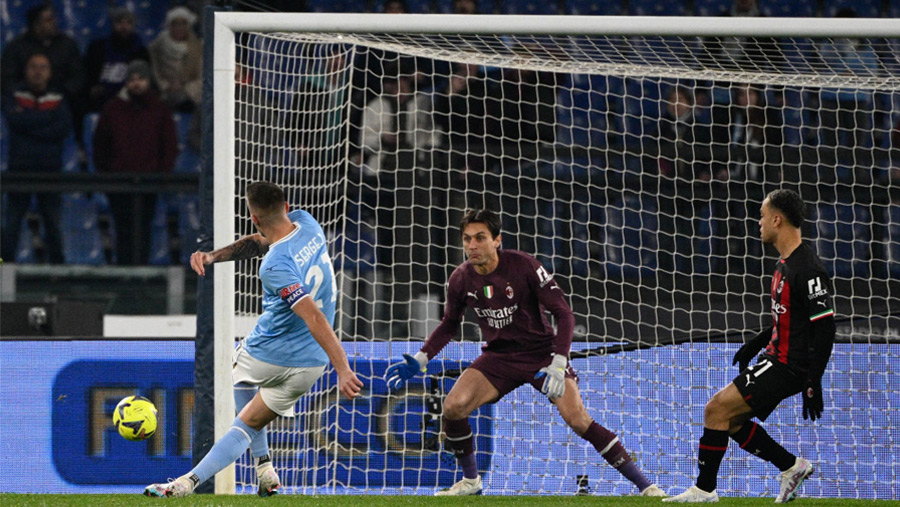 Lazio shot into Serie A's Champions League places on Tuesday (Jan 24) after hammering AC Milan 4-0 to leave the champions' title defence hanging by a thread. Lazio breezed up to third on goal difference ahead of Inter Milan and local rivals Roma and a point behind second-placed AC Milan, who gave a disastrous display at the Stadio Olimpico in Rome.

AC Milan’s desperate run of form continued as they suffered a humiliating 4-0 defeat to Lazio in Rome on Tuesday (Jan 24), leaving the Rossoneri 12 points adrift of Serie A leaders Napoli.

Sergej Milinkovic-Savic fired Lazio into an early lead and Mattia Zaccagni deservedly doubled their advantage before the break.

Luis Alberto’s second-half penalty and a Felipe Anderson strike completed the rout in the second-half as Milan’s winless run stretched to five games in all competitions.

An impressive performance from the Biancocelesti sent them into third place, one point behind Milan and ahead of Inter Milan and Roma on goal difference.

Lazio started as they meant to go on when Zaccagni found space on the left wing and played a low ball across goal, which was dummied by Alberto before Milinkovic-Savic profited from some statuesque defending to finish.

Milan looked every inch a side lacking confidence and form as they struggled to get a foothold in the game, and their efforts were disrupted further when Fikayo Tomori limped off midway through the first half to be replaced by Simon Kjaer.

Lazio soon took control as a Zaccagni volley was deflected just wide and Felipe Anderson was inches away from tapping in a Pedro cross, and they eventually found a way through Milan’s creaking defence once more.

Adam Marusic made a good run into the box and his angled shot was nudged onto the far post by Ciprian Tatarusanu, but Zaccagni was on hand for the simplest of tap-ins.

The winger could’ve had another before half-time when he raced onto a perfect-weighted Alberto through ball, but Kjaer denied the Italian with a last-ditch block.

Pioli eventually called for desperate measures as he made a triple change, and a deflected Rafael Leao effort and threatening Ismael Bennacer free-kick were encouraging signs.

But any chance of a comeback disappeared when Pierre Kalulu tripped Pedro in the box, allowing Alberto to step up and hammer a penalty into the roof of the net.

The rout was completed with 15 minutes to go when a deft pass from Alberto sent Anderson one-on-one with the keeper, and he steered home a finish.