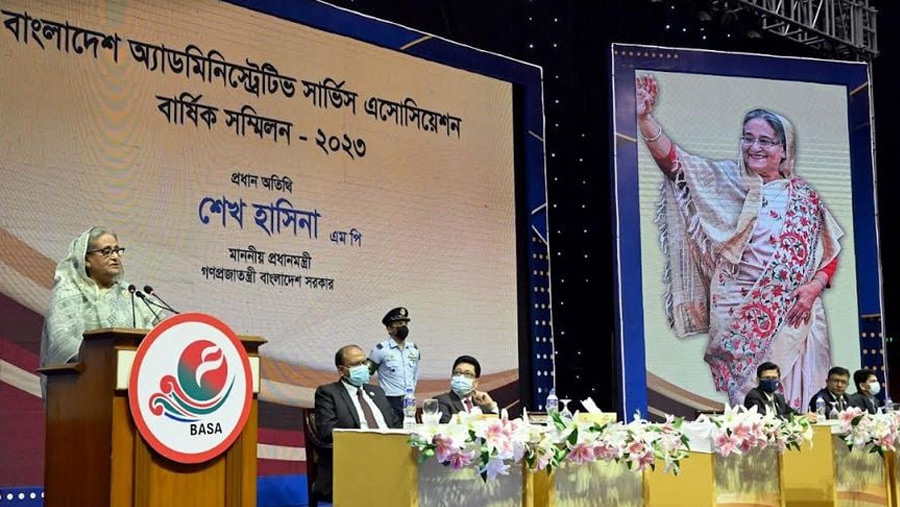 Prime Minister Sheikh Hasina on Tuesday (Jan 24) said she came to power only for giving the people a beautiful life and vowed to transform Bangladesh into a country of having per capita income at least $12,000 by 2041, urging all concerned to remain alert as conspiracies are being hatched against the country's advancement.

She was addressing as the chief guest the annual conference 2023 of the Bangladesh Administrative Service Association (BASA) at the Bangabandhu International Conference Centre (BICC) in Dhaka in the evening, local media reported.

The PM said Bangladesh has become 35th largest economy in the world despite the global recession steaming from the Covid-19 pandemic and the Russia-Ukraine war.

Bangladesh has made five steps up in the global economic index despite the global situation which in no way is a small thing, she said and called upon all to be alert as conspiracies are being hatched against the development of the country.

Referring to the construction of the Padma Bridge with its own finance overcoming the conspiracies, the PM vowed that Bangladesh must march towards advancement confronting all the hurdles that included conspiracies.

Sheikh Hasina said she is coming to power to give something to the people rather than to get something.

"I once again want to say that I come to (power) not to take something, but to do a work only and give something to the people of Bangladesh. My only target is to present the countrymen a developed and beautiful life," she added.

Describing the fresh BCS officers of administration as the soldiers of 2041, she said they are entrusted with transforming Bangladesh into a developed, prosperous and Smart Bangladesh by 2041 and giving the people an improved life as envisioned by Father of the Nation Bangabandhu Sheikh Mujibur Rahman.

The PM gave credit to the officers to achieve the status of a developing country with facing the challenges that have been arisen from the Covid-19 outbreak.

She said she found the government officers sincere in performing their professional duties since assuming office.

The PM called for building an efficient workforce with high technological knowledge to cope with the fourth industrial revolution.

Sheikh Hasina, also President of the Bangladesh Awami League, recalled the gun attack on her and her party men at a public rally at Laldighi Maidan in Chattogram on Jan 24 in 1988 in which 30 leaders and activists of her party were killed.

The PM said she had narrowly escaped death as a bullet passed over her head while a party activist saved her life by receiving another bullet in his body.

"I have survived miraculously. I have to face such incidents many times. But, I don't dare to die. I am coming to the power to work for the people and the people are my strength," she said.

President of the BASA and Shipping Ministry Secretary Md Mostafa Kamal gave the address of welcome and its Secretary General and Additional Secretary of Industries Minister SM Alam gave the vote of thanks.