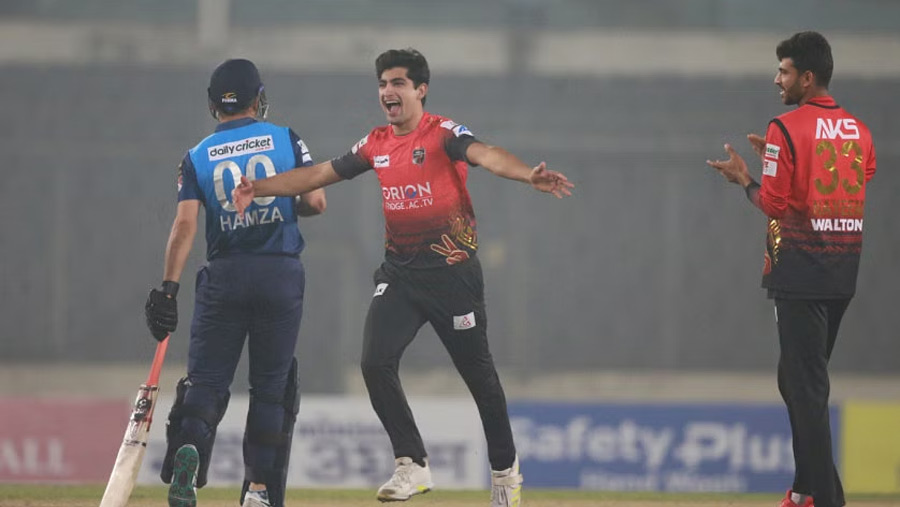 Comilla Victorians registered their fourth consecutive win in the Bangladesh Premier League (BPL) as the reigning champions clinched a comprehensive 60-runs win over Dhaka Dominators in the days' second fixture at the Sher-e-Bangla National Cricket Stadium in Mirpur on Monday (Jan 23).

Chasing 165 runs posted by Comilla, Dhaka's fragile batting department was undone by some fiery bowling by Pakistani pacer Naseem Shah. The right-arm seamer, who made his BPL debut, ended up picking four wickets while conceding just 12 runs from his four overs as Dhaka eventually ended up on 104 for nine after 20 overs.

Only three Dhaka batters were able to hit double digits. Usman Ghani top-scored with 33 runs as they eventually surrendered helplessly in the end.

Meanwhile, Soumya Sarkar continued his poor run of form and was dismissed on three while inform skipper Nasir Hossain missed out after scoring 17 runs.

With six defeats in seven games, Dhaka are struggling at the bottom of the points table.

Earlier, Comilla were in a spot of bother after being sent to bat and were struggling on 35 for two in the Powerplay. However, contributions in the middle from skipper Imrul Kayes (28), Johnson Charles (32) kept Comilla in the game.

Player-of-the-Match Khushdil scored a quick 17-ball 30, featuring two sixes and two fours, and Jaker Ali played an unbeaten cameo of 20 off 10 deliveries as Comilla post a challenging total 164 for six in 20 overs.