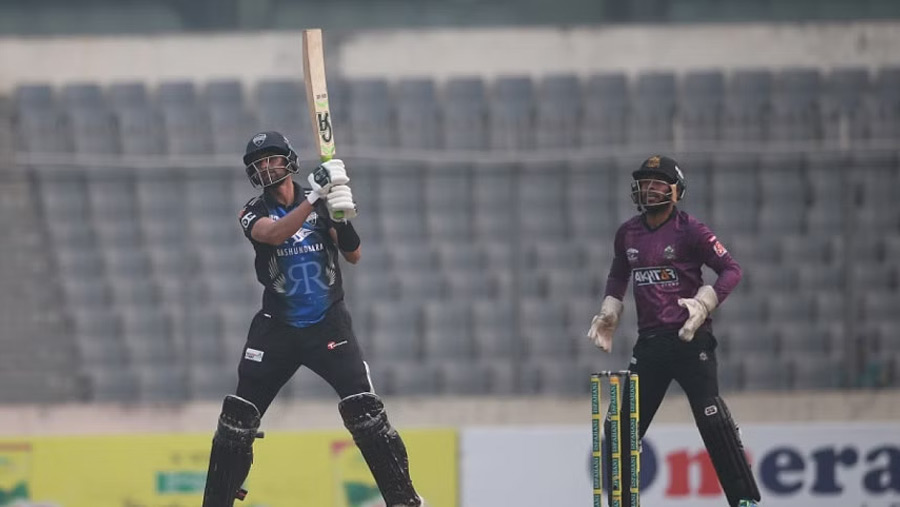 Pakistan recruit Shoaib Malik struck an unbeaten 45 ball-75 as Rangpur Riders cruise to a 55-run victory over Chattogram Challengers for their third win in the Bangladesh Premier League (BPL) Twenty20 tournament at Sher-e-Bangla National Cricket Stadium on Monday (Jan 23). His brilliant knock which included five fours and as many sixes was complemented by an equally aggressive 24 ball-42 by Afghan recruit Azmatullah Omarzai as Rangpur compiled a hefty 179-6. Chattogram was nowhere near to challenge the total as they were bowled out for 124 in 16.3 overs.

Shoaib Malik once again starred with a match-winning performance for Rangpur Riders as the veteran all-rounder smashed 75 runs off 45 balls to set up a 55-run win over Chattogram Challengers at the Sher-e-Bangla National Cricket Stadium on Monday (Jan 23).

Nurul Hasan Sohan's side posted 179-6 after being invited to bat first and came back with a clinical display with the ball to bundle out Chattogram for 124 mid-way into the 17th over.

Batted first, Rangpur got off to a sluggish start and they were reduced to 47 for three in the ninth over following the dismissal of opener Mohammad Naim who once again had a difficult stay at the crease scoring 34 runs off 29 balls.

Malik took responsibility and dug Rangpur out as he put together a 105-run stand with Azmatullah Omarzai who hit four sixes and one four for his 24-ball 42 before he fell to Mehedi Rana, while Malik remained unbeaten helping Rangpur post a challenging total.

In reply, Chattogram's hurried approach saw them start the innings at a decent pace but the loss of wickets at regular intervals didn't help their cause as they were reduced to 77 for four in the 10th over.

To make things worse, Chattogram batter Afif Hossain fell ill during the match and didn't walk out to bat as he went back to the team hotel.

Shuvagata's 31-ball 52 where he smashed four sixes and fours was the highlight of Chattogram's batting effort but the hopes of a win were buried with the loss of their captain's wicket as they were bundled out for 124.

Left-arm spin of Rakibul Hasan did the damage upfront as he picked up two wickets for 24 runs, and Pakistan speedster Haris Rauf hauled three wickets for 17 runs.