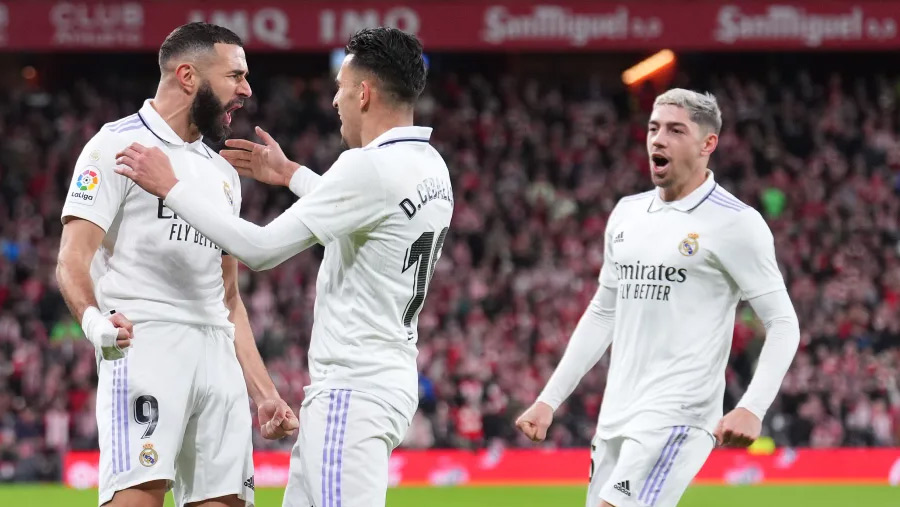 Real Madrid secured their first LaLiga win since Dec 30 by beating Athletic Club 2-0 at San Mames, ensuring Barcelona’s lead at the top of the table remains just three points. The Catalans had put pressure on their Madrid rivals earlier on Sunday evening by landing a narrow (1-0) win against Getafe to at least temporarily open up a six-point gap. But Real responded in kind on their travels to the Basque region of Spain.

Champions Real Madrid earned a 2-0 win in a feisty LaLiga encounter at Athletic Bilbao on Sunday (Jan 22) to ensure they stayed in the hunt for the LaLiga title with leaders FC Barcelona.

Barca moved to 44 points in the standings after their 1-0 win over Getafe earlier on Sunday. They are three points ahead of Real and six points in front of third-placed Real Sociedad. Bilbao are eighth with 26 points.

Real Madrid, beaten by Villarreal in their last league outing, secured the points thanks to a first-half goal from Karim Benzema and a strike from Toni Kroos in added time.

After a frantic come-from-behind 3-2 win in the Copa del Rey in midweek, coach Carlo Ancelotti decided to rest veterans Luka Modric and Toni Kroos and give an opportunity to midfielder Dani Ceballos, who was instrumental in his team's triumph.

Alongside youngster Eduardo Camavinga, who also played a superb match, Ceballos started the play that ended with Benzema's brilliant finish.

In the 23rd minute, he passed to Federico Valverde in the right channel, who crossed to Marco Asensio whose towering header fell into Benzema's path and the Frenchman quickly fired a left-footed volley into the left corner.

"Today it was evident that our team were back at defending well," Ancelotti told DAZN.

"We were solid and compact like we used to be and it's important for us to keep that same mentality and attitude going forward.

"Ceballos played very well throughout the game, showed personality with the ball, well positioned without the ball.

"He hasn't played much but it's a moment of the season that we need everyone to show up like he is doing."

Asensio, Vinicius Jr and Valverde missed good chances to extend Real's lead in the second half.

Williams wasted a golden opportunity to equalise in the 69th minute when a series of mistakes by Real's defence gifted him the ball inside the box, but he missed the target with a poorly executed shot in front of an empty goal. His brother, Inaki Williams, had a goal ruled out a few minutes later for an offside in the build-up that left Athletic's players and staff seething.

After Athletic and Real Madrid both squandered numerous chances to score, the visitors extended their lead in the 91st minute when Rodrygo found substitute Kroos who slotted in a powerful low strike from the edge of the box just inside the left post.

Earlier Villarreal, fifth, needed a penalty after 100 minutes to beat mid-table Girona 1-0. Dani Parejo converted. Gerard Moreno had missed a penalty in the 93rd minute but the hosts were awarded another in the final seconds.

Bottom of the table Elche earned a 1-1 draw against Osasuna, seventh, but remain without a win this season in the top flight.