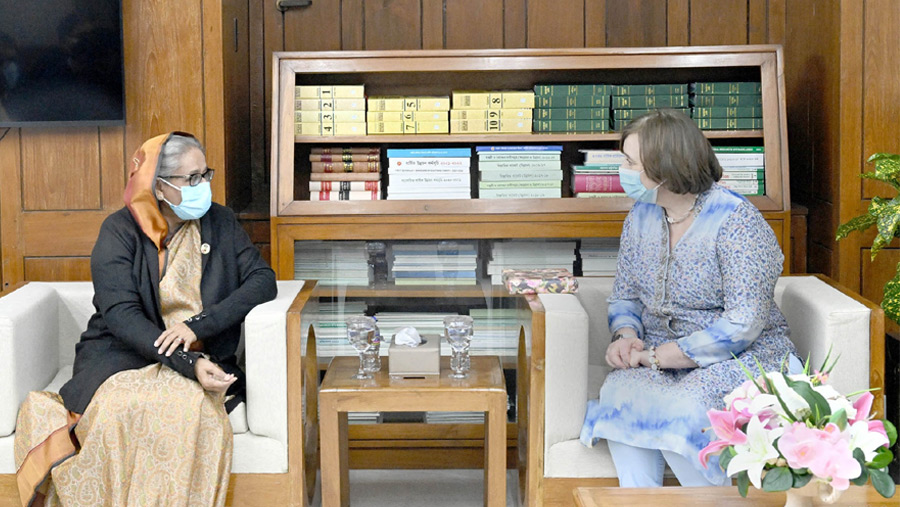 Prime Minister Sheikh Hasina on Sunday (Jan 22) said the government will march Bangladesh towards the developed nation taking the women folks with it.

The PM said this while a delegation of council of patrons of the Asian University of Women (AUW) called on her at her Sangsad Bhaban office in Dhaka. Chancellor of the University Cherie Blair led the team.

The PM mentioned that the prime task of her government is to ensure overall development of the country including food, education and healthcare for all.

In this regard, she asked the AUW representatives to provide that educational curriculum which will make them entrepreneurs and skilled to build them as human resources to face the challenges that are coming in future.

"Not only the general education, but provide the education which will make them skilled, not create unemployed," she said.

Sheikh Hasina mentioned that she donated the land for the university. "Women education is essential for development for any country," she said.

She briefly described various programmes of her government during her tenures.

While the issue of Afghanistan came during the meeting, the PM said that there is no scope to stop the education for the women in the name of Islam. She also mentioned that Islam always patronises the equal rights of man and women.

In this regard, she said that she also faced serious opposition regarding the women leadership while she joined the politics.

Regarding the Afghanistan issue, she said that the present Afghanistan government forcibly stop the education for the women. "The whole world is witnessing this, no one is taking any step against it," she said.

She mentioned that she devoted her life for the development of the country and its people.

Talking about Rohingya issue, the PM said that the government is imparting education Rohingya children with their own language.