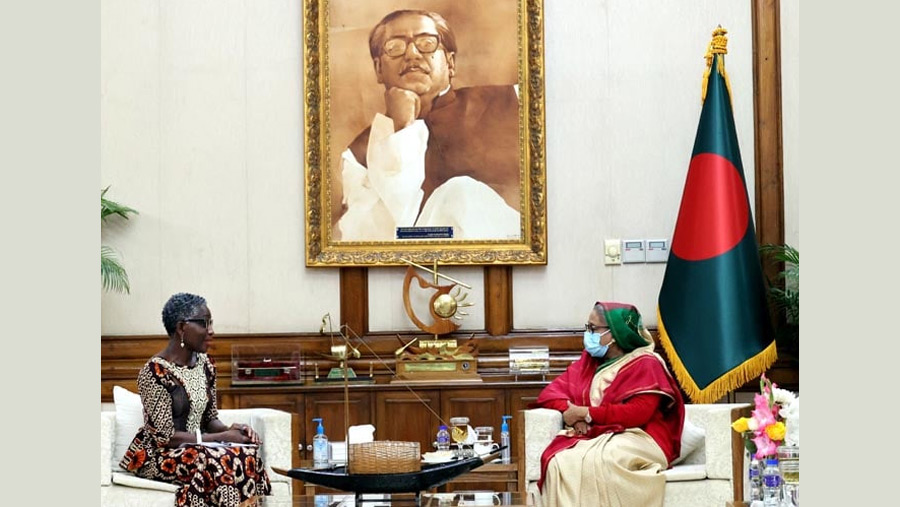 International Monetary Fund (IMF) will continue support for Bangladesh to accomplish its aspiration to become a developed, prosperous and higher income country by 2041.

"Bangladesh has aspiration to become a developed, prosperous and higher income country by 2041, and IMF will continue its support," said the lending agency's Deputy Managing Director Antoinette Monsio Sayeh while paying a call on Prime Minister Sheikh Hasina at her official residence Ganabhaban.

Antoinette Monsio said IMF cherishes the long standing partnership with Bangladesh, and she came here to further strengthen the relationship.

The PM said Bangladesh does not want any assistance from the IMF for bail-out, rather the country has wanted the support as a preemptive measure.

"We don't' want any bail-out. Our this programme is not a bail-out," she added.

The IMF deputy managing director said the whole world faces challenges due to the staggering impacts of the Covid-19 pandemic and a difficult situation because of the Russia-Ukraine war.

In this situation, the emerging economies like Bangladesh are facing different problems related to inflationary pressure, price-hike of commodities and the reserve of foreign currencies, she said.

She continued that the IMF will stay beside Bangladesh's efforts to face these problems.

The PM said the pace of the country's progress has slowed down due to the Covid-19, Russia-Ukraine war and sanctions and counter-sanctions.

Bangladesh has also fallen into difficulties due to the commodity price-hike, she said, adding that the government has widened the social safety net and expanded food programmes to support the lower income people.

She said Bangladesh is bringing the fallow lands under cultivation to boost food production.

The lower-income people are suffering from high inflation even in many developed countries, she added.

The IMF deputy managing director praised the socio-economic transformation under the leadership of PM Sheikh Hasina.

She also mentioned successes of the government in various sectors including women empowerment, education, agriculture and achieving over 6 percent GDP growth during last one decade.

Pointing out various development programmes of her government, the prime minister said the aim of such programmes were to alleviate poverty and ensure food security of the poor community.

In this regard, she said steps have been taken to explore young entrepreneurs who want to be self dependent through initiatives like Young Bangla Movement.

Sheikh Hasina also highlighted her government's measures for women empowerment and female education, saying 60 percent of the primary teachers are female, while gender parity in secondary level has come with girls and boys ratio of 53 and 47.

The government has also given utmost importance on ICT, she said, adding a strong and young free-lancer community has been developed in the country as necessary training and incentives are being provided to them.

The PM also mentioned services being provided from the community clinics and said women living in the villages are its main beneficiaries.

In the meeting, the IMF delegation handed over two photographs to the premier, which was taken while Bangladesh was signing the IMF's Articles of Agreement on Aug 17, 1972 to obtain its membership.