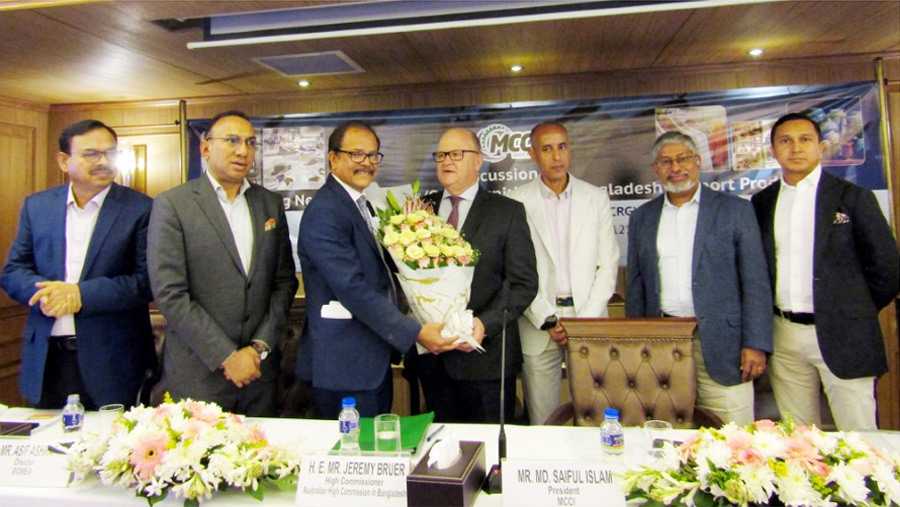 A delegation from Country Road Group (CRG) of Australia visited the Gulshan office of the Metropolitan Chamber of Commerce and Industry (MCCI), Dhaka on Dec 13. H.E. Jeremy Bruer, High Commissioner, Australian High Commission in Bangladesh, graced the interactive event as the chief guest. Rachid Maliki, GM, Global Supply Chain and Sourcing, led the CRG delegation and was also the special guest of the event. The event was moderated by the MCCI President Md. Saiful Islam.

Country Road Group is one of Australia’s largest specialty fashion retailers, with a market leading position in the mid to upper tier of the segment. It is a subsidiary of Woolworths Holdings Limited. As of 2022, its brands include Country Road, Mimco, Trenery, Politix, and Witchery.

The purpose of the CRG delegation’s visit to MCCI was to exchange views to improve bilateral cooperation and increase trade between Australia and Bangladesh.

The CRG delegation was warmly received by the MCCI team led by the President Md. Saiful Islam. The President acknowledged Bangladesh’s need for product and market diversification in the export market, with both increasing with the pandemic and Russia-Ukraine conflict effects. With LDC-graduation in 2026, Bangladesh would have to overcome the challenges of loss of preferential treatment in its export markets. He also praised Australia’s decision to allow Bangladeshi exports preferential treatment in Australia even after LDC-graduation. As facilitators of trade and commerce, MCCI would always pursue improving trade between the two countries, he reaffirmed.

Special guest Rachid Maliki gave a brief introduction of CRG. Since Bangladesh’s share in CRG’s sourcing was very low, it had much room for improvement. Maliki praised Bangladesh’s latest factories and how those underscored safety, security, and green transition. He also highlighted the local entrepreneur’s positive change in mentality, which he thought could ultimately help in CRG deciding to source more from Bangladesh.

The discussion revealed that Australians valued maintaining good relations with importers, so Bangladesh should focus on building relationships. By emphasizing going green, using solar energy, and ensuring product quality, safety and security at the workplace, Bangladesh could enter the Australian market with new products, especially with tea and ceramics. Likewise, they pointed out that the volume of RMG exports to Australia could also increase, but foreign producers would want sustainability, ethical practices, honesty, and transparency ensured. Other critical factors that Australian buyers would look at before buying would be management strength, competitive pricing, transparency, and operational excellence.

Chief guest H.E. Jeremy Bruer said as Australia and Bangladesh produced complementary products, tapping into those could push the bilateral trade up. Australian LNG and wool could be useful for Bangladesh, while Australia could find Bangladesh’s agricultural products useful. The High Commissioner affirmed Australia was ready to help and support ideas of a bilateral trade boost at the government level. He also underscored the need for sustainability.

Finally, both CRG and MCCI emphasized how Australia and Bangladesh should take the bilateral trade to higher levels and agreed to work together in that regard. The bilateral chambers could play a big role in taking this initiative forward.

The event ended with a vote of thanks from the MCCI Vice-President Habibullah N. Karim.