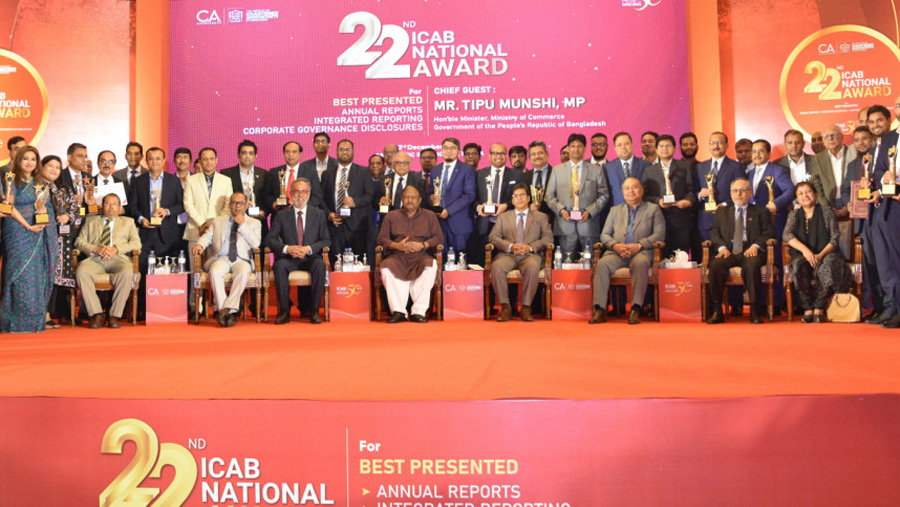 Twenty-five organisations have received the 22nd ICAB National Award for best presented Annual Reports, Integrated Reporting, and Corporate Governance Disclosures-2021. Listed and non-listed banks, non-bank financial institutions and other entities representing 16 different sectors were handed over the awards at a ceremony organised by the Institute of Chartered Accountants of Bangladesh (ICAB) at a city hotel on Saturday (Dec 4) evening.

The Institute of Chartered Accountants of Bangladesh (ICAB) has distributed awards to listed and non-listed 25 entities in 16 different sectors for their annual reports, integrated reporting and corporate governance disclosures-2021.

Apart from recognizing the first, second and third positions in each category, 17 entities were awarded the "Certificate of Merit" on achieving minimum threshold scores. Among all the winners, Bank Asia Limited became the over-all winner.

During the year, ICAB-RCPAR received annual reports from 88 entities. Award for Agriculture category could not be considered because of scoring lesser than threshold marks by the participating entities.

As the chief guest Commerce Minister Tipu Munshi handed over the awards to the winners at a gala event held at a city hotel on Saturday (Dec 3). Distinguished guests from different Ministries, trade bodies, regulators, stakeholders and awardees attended the ceremony, said a press release.

From the winning companies, three best annual reports under each award sector will be nominated by ICAB to the South Asian Federation of Accountants (SAFA) BPA competition next year in recognition of their excellence in financial disclosure.

Winners of ICAB BPA awards are:

Only Eastern Housing Ltd received certificate of merit in the category of infrastructure and construction.