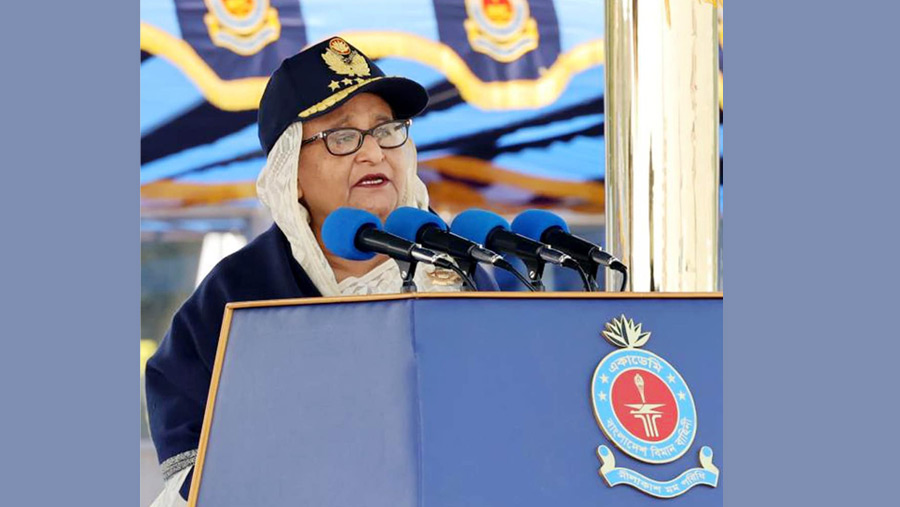 Prime Minister Sheikh Hasina on Thursday (Nov 24) said the country's economy still remains vibrant and safe enough despite the entire world is going through an economic recession due to the Covid-19 pandemic, Russia-Ukraine war and sanctions.

"I can say that our economy is still vibrant and safe enough although the entire world is witnessing economic meltdown due to the Covid-19, Russia-Ukraine war and sanctions," she said.

The PM said her government is very much alert and active to overcome the global recession.

She said this while addressing a ceremony at the parade ground of the Bangladesh Air Force Academy here marking the President Parade (Winter)-2022, local media reported.

The premier directed the newly-commissioned Bangladesh Air Force cadets to be responsive towards the country and its people while discharging their professional duties being imbued with patriotism, sincerity and integrity.

She simultaneously asked the newly commissioned cadets to remain prepared all the time to enhance professional excellence with proper utilisation and practice of the training achieved from the air force academy.

The PM asked the fresher to put emphasis on training as it increases the excellence.

"Our air force is working in the United Nations peacekeeping missions where they have to compete with many countries. So, it needs to put high importance on training. You should always remember that the training increases the excellence," she added.

The prime minister greeted the newly commissioned air force personnel saying, "I want successful and beautiful life of every cadet. We also desire to feel proud of our cadets."

Briefly describing various measures taken by her government to impart the air force members with proper and timely training, she said, "We have always given priority on training."

Sheikh Hasina thanked the air force personnel as they stood beside the distressed people during any disaster like cyclone, flood and the Covid-19 pandemic.

"The air force members always stand beside the people and serve them in every disaster like flood and cyclone. The most important thing is to achieve people's trust and confidence through discharging duties which is essential to win any war despite we don't want war rather want peace," she added.

Sheikh Hasina said the Bangladesh Air Force has now become more powerful and modern than ever before in terms of infrastructure, tactics and technology as her government has taken various pragmatic measures in line with the Forces Goal-2030.

The "Forces Goal-2030" was formulated in accordance with the Defence Policy of 1974 adopted by Father of the Nation Bangabandhu Sheikh Mujibur Rahman, she said.

The PM said her government is trying to build every force as strong enough following the footprints of the Father of the Nation as she took measures to strengthen every institution including the armed forces as time-befitting and modern since assuming power in 1996 after 21 years.

After coming to power for the second time in 2009, she said they have concentrated on increasing operational capacity of the air force and inducted F-7 BGI fighter aircrafts, C-130J transport aircraft with the latest avionics, MI-171Sh helicopters, and maritime search and rescue helicopters into the air force fleet.

She said: "Due to the timely measures of the government, nowadays our air force has become a very smart and efficient one."

The PM said the Father of the Nation wanted the BAF Academy to attain acclamation from not only South-East Asia, but also from the globe.

She recalled the contribution of Bangabandhu in shaping the armed forces with limited resources during his three and a half years tenure alongside building the war-ravaged country.

Marking the President Parade, Bangladesh Air Force arranged a spectacular parade and colourful fly past at its Jashore Academy which the premier inspected riding on an open jeep.

The PM also handed over the 'Sword of Honour' 'Chief of Air Staff Trophy' 'Commandant's Trophy' and other prizes among the best cadets.

In the function, a total of 10 flight cadets received the flying badges from her for their successful completion of the basic flying training in PT-6 aircraft.

Besides, a flight cadet received the coveted Sword of Honour and Commandant's Trophy, while two others received Birshreshtha Matiur Rahman Trophy and Chief of Air Staff Trophy for their best performances in different categories during the 81st BAFA course.

On her arrival at the BAF Academy here by a helicopter, Chief of Air Staff Air Chief Marshal Shaikh Abdul Hannan received the PM.