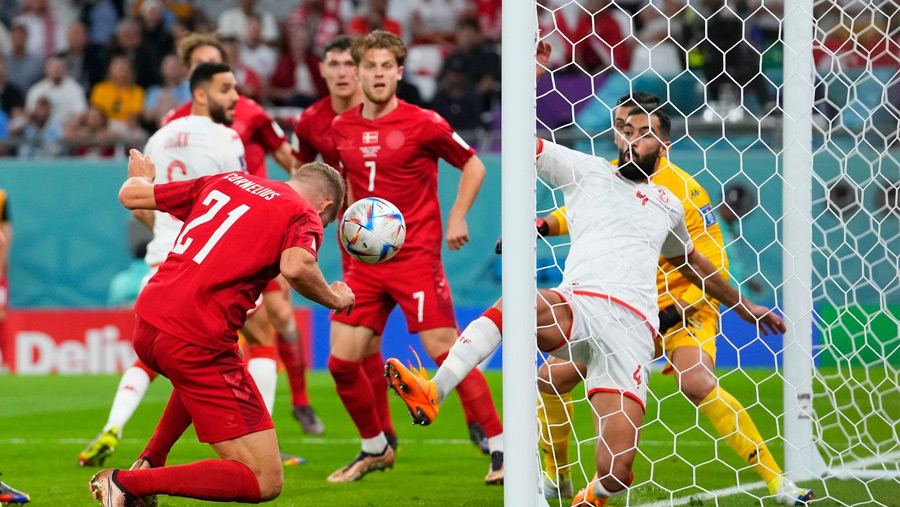 Denmark were forced to settle for a point on their 2022 FIFA World Cup opener in Group D, as Kasper Hjulmand’s side were held to a 0-0 draw by Tunisia at Education City Stadium in Al Rayyan.

Denmark were held to a draw by Tunisia in their World Cup opener in a raucous atmosphere at the Education City Stadium in Al Rayyan.

Despite fielding many Premier League regulars, the much-fancied Danes were given a tough workout in Group D.

Christian Eriksen, appearing for Denmark having suffered a cardiac arrest in their opening game of Euro 2020 only last summer, was mostly well shackled, although he did draw a fine save from Aymen Dahmen in the second half.

Both sides had goals ruled out for offside, while Denmark's Andreas Cornelius somehow missed from a yard.

There was 95th-minute drama when referee Cesar Ramos checked the pitchside monitor over a potential Denmark penalty for handball, only to stick with his original decision.

One of the pre-tournament favourites, Denmark will need to find some form if they are to qualify from a tricky-looking group.

At Euro 2020, Denmark rode a crest of emotion to the semi-finals and confidence was high going into this tournament in Qatar, with nine wins out of 10 in World Cup qualifying.

However, Tunisia were unfazed by reputation and, perhaps inspired by Saudi Arabia's stunning win over Argentina and a vociferous crowd acclaiming every tackle, they made it uncomfortable for the Danes.

Denmark almost got away with a disjointed display when the video assistant referee suggested a penalty check after the ball had hit Yassine Merriah's arm - but the referee decided his on-pitch call had been correct.

Indeed, Ramos was showing great consistency, having earlier deemed that a similar incident at the other end against Andreas Christensen was not a penalty either.

At Euro 2020, Denmark thrived on the tag of underdogs. Badged as favourites here, this was a difficult 90 minutes and they will need to go through the gears to progress in this tournament.

With holders France up next on Saturday (16:00 GMT kick-off), it will only get harder for Kasper Hjulmund's side.