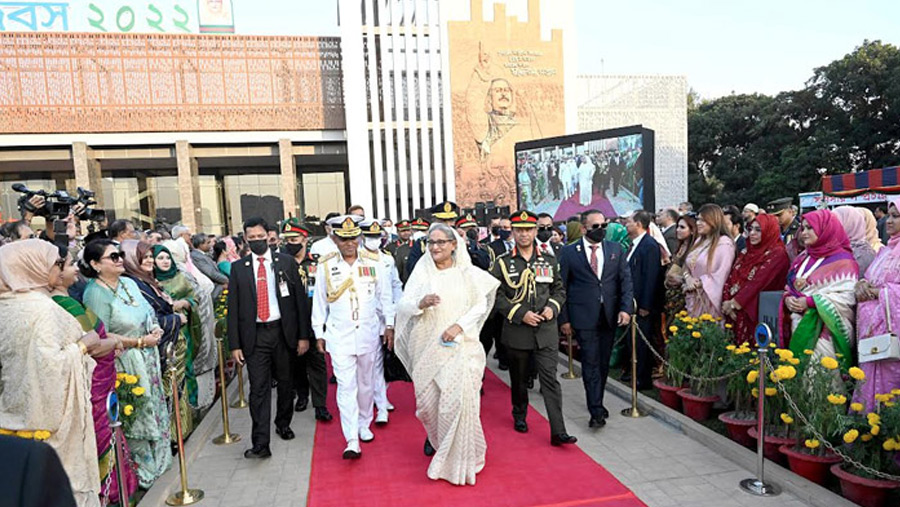 Prime Minister Sheikh Hasina on Monday (Nov 21) said the country’s economy keeps rolling although the world has been going through a global crisis and economic recession, hoping that Bangladesh must move ahead confronting the global crisis with cooperation of all.

“Amidst global economic recession, our economy is still moving and pulsating. But, with cooperation of all, we will overcome the situation,” she said while speaking at a reception ceremony marking the Armed Forces Day-2022 at the Senakunja in Dhaka Cantonment, local media reported.

The PM said although the world recognised Bangladesh as a role model of development, the country has fallen to some troubles due to the Coronavirus, Russia-Ukraine war, sanctions and counter sanctions.

She reiterated her call to all in bringing every inch of land under cultivation to grow own food aimed at overcoming the global crisis.

The premier said the entire world from the United States, Europe and Great Britain is going through an economic meltdown and Britain has already announced that it is facing an economic recession.

“Pray to Allah as we can protect Bangladesh from the economic recession and looming famine,” she said.

As the world is reeling from the Coronavirus, she said the earth has been rattled by the Russia-Ukraine war for which the prices of various commodities that included fuel, edible oil, wheat, maize have increased manifolds alongside the transportation costs.

The PM said despite the fact her government has been trying its best to keep people out of the sufferings.

“We’re trying as the people of our country cannot suffer from the global crisis. So, we’re purchasing the goods from anywhere in the world by paying how much their prices are,” she said.

Speaker of the parliament, cabinet members, political leaders, foreign diplomats, high military and civil officials were present at the function.

To ease the public sufferings amid the global crisis, Sheikh Hasina said they are giving 30 kilograms of rice to elderly and physically disabled people free of cost while 15 kilograms of rice is being given at Tk 15 per KG to 50 lakh lower class people.

She also said that they have distributed TCB cards to one crore people as they can purchase four essentials, rice, oil, pulse and sugar at fair price alongside giving monetary assistance to village level during the Covid-19 pandemic as none remained deprived.

The PM said they have a target to give landless and homeless people home at government expenses to give them a beautiful and improved life as envisioned by the Father of the Nation.

“We’re implementing all sorts of measures to upgrade the living standard of the masses,” she said.

Sheikh Hasina, also President of the Bangladesh Awami League, said her government has been able to carry out massive development of the country due to the continuation of democracy since her party assumed office in 2009 after winning the 2008 general election.

“We’re in power till date through people’s mandate since 2009. The democratic process is continuing in Bangladesh and we have been able to make huge developments due to it,” she said.

She recalled that the Awami League government had the first one in Bangladesh’s history which handed over power peacefully upon completion of its first tenure in 2001.

Sheikh Hasina, also minister of the defence ministry, said the Father of the Nation wanted to develop the Bangladesh Army as the “People’s Army” and it has really been turned into a pro-people one as it stands beside the masses during any disaster or crisis.

“I believe that our army is now truly becoming the people's army. The armed forces stand beside the people and extend cooperation to them during any disaster and accident,” she said.

Referring to the foreign policy “Friendship to all, malice to none” formulated by Father of the Nation Bangabandhu Sheikh Mujibur Rahman, the PM said Bangladesh doesn’t want war against any country rather pursues peace and friendship.

“I will tell one thing that we’ll not fight against anyone. We want peace. The Father of the Nation has taught us it and we’re working to ensure socio-economic development of the commoners of our country by maintaining friendly relations. The people of the country are now benefiting from it,” she said.

Referring to solving the enclave problem with India in a peaceful manner by implementing the land boundary agreement, she said it had set an example for the entire world.

She added that her government had won a vast sea area, winning legal battles with neighbouring India and Myanmar by maintaining friendly relations.

Sheikh Hasina said her government has taken measures to build armed forces as stronger ones as the Father of the Nation wanted it and for which he formulated Defence Policy in 1974, adding that they have formulated Forces Goal-2030 in line with the defence policy to make the armed forces as time befitting equipped with all modern equipment, arms and vehicles and world class training as they can compete the global standard.

“We want armed forces to be time befitting – we’re making the armed forces stronger in accordance with the Force’s Goal-2030,” she said.