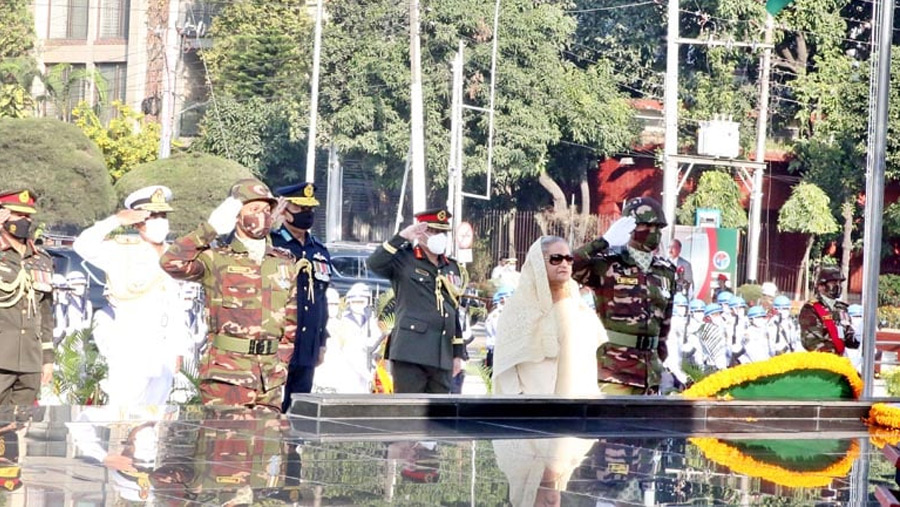 Prime Minister Sheikh Hasina on Monday (Nov 21) paid glowing tributes to the martyred members of the Bangladesh Armed Forces on the occasion of the Armed Forces Day-2022. The PM paid the homage by placing a wreath at the Shikha Anirban (flame eternal) in Dhaka Cantonment in the morning, local media reported.

After laying the wreath, she stood in solemn silence for some time as a mark of profound respect to the memories of the armed forces martyrs, who made supreme sacrifices during the War of Liberation.

A smartly-turned out contingent drawn from Bangladesh Army, Navy and Air Force presented a guard of honour at that time, while the bugle played the last post.

Later, Sheikh Hasina, also in-charge of the Ministry of Defence, signed the visitors’ book kept on the premises of Shikha Anirban.

After the wreath-placing ceremony, the prime minister went to the Armed Forces Division (AFD) where her Security Adviser Major General (retd) Tarique Ahmed Siddique and chiefs of the three services made a courtesy call on her.

On her arrival at the AFD, Sheikh Hasina was received by the PSO and director generals of the AFD.