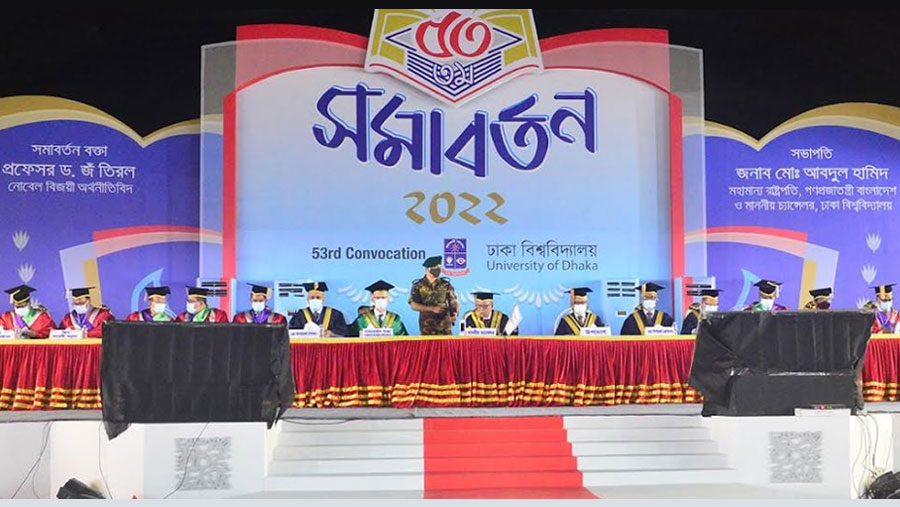 Dhaka University (DU), the oldest university in Bangladesh, held its 53rd convocation amid festive moods with the participation of 30,348 graduates and researchers on its campus in the city on Saturday (Nov 19).

President Md. Abdul Hamid, also the Chancellor of the university, presided over the gala event at the central playground while Nobel Laureate French Economist Dr Jean Tirole attended the program as convocation speaker.

For the students, it was a day full of laughter, hugs and celebration and above all pride for the students of Dhaka University as they have reached a milestone of their life.

Of the participants, a total of 22,287 students participated on the venue of Dhaka University and as many as 7,796 students took part in the program from the Dhaka College and Eden College venues.

While addressing the ceremony, Convocation Speaker Nobel Laureate Professor Dr Jean Tirole said the graduates should develop self-confidence, sense of responsibility and the ability to make right decisions at the right time to achieve success in their careers as well as to do something for the wellbeing of all.

Emphasizing on proper management in this regard, he said, "If you work hard in a planned way, it is possible to reach the desired goal. The Nobel Laureate praised Bangladesh for achieving extraordinary success and progress in the field of socio-economic development".

He said, "Your new degree not only comes with many opportunities but also some duties. As convene of the University of Dhaka, you would have to relentlessly represent the excellence of your inspiration".

"You graduated today at the time when the world scientists have more than ever a need of good policy... how can we manage the digital revolution to benefit society and protect consumers, workers and citizens, how can we fight climate change to protect and respect the planet and its population and finally, how can we guarantees and increasingly complex financial system," added the convocation speaker.

Bangladesh has got remarkable achievement in the last 15 years and you should be proud of it, he said, adding, "The country is also facing many challenges. You have to come forward as the rest remains for you."

"You also the generation that will tackle many doubting but exciting challenges...You must behave in a socially responsible way," he said, urging the graduate to become better human being and better citizens and contribute to the construction of common good.

"Be brave and bold, behave in a socially responsible way and make the world a better place. Finally, you believe in yourself, your passion and environment will take you a long way," he added.

On the other hand, it has taken the necessary steps to prepare its teachers, students and researchers so that they can adopt with the technological world order like the fourth industrial revolution, he added.

Efforts are being made to determine the roadmap for the university to move forward in the next hundred years keeping the multifaceted reality under consideration.

The 'Master Plan' of the university has been formulated taking the various academic needs for research and innovation into account as well as improving the quality of education.

Academic Development Plan has already been adopted with the aim of making the academic curriculum up-to-date, he said, adding, "A committee consisting of eminent teachers and researchers of the university is working to this end".

Cabinet members, national leaders, MPs, representatives of various diplomatic missions, DU Senate and Syndicate members and researchers, among others, were present there.

An honorary doctorate degree was conferred to Professor Dr Jean Tirole in the convocation.

A total of 52 people have been awarded honorary doctorate degrees since the beginning of Dhaka University.