Not sitting idle with reserve, using it for people's welfare: PM 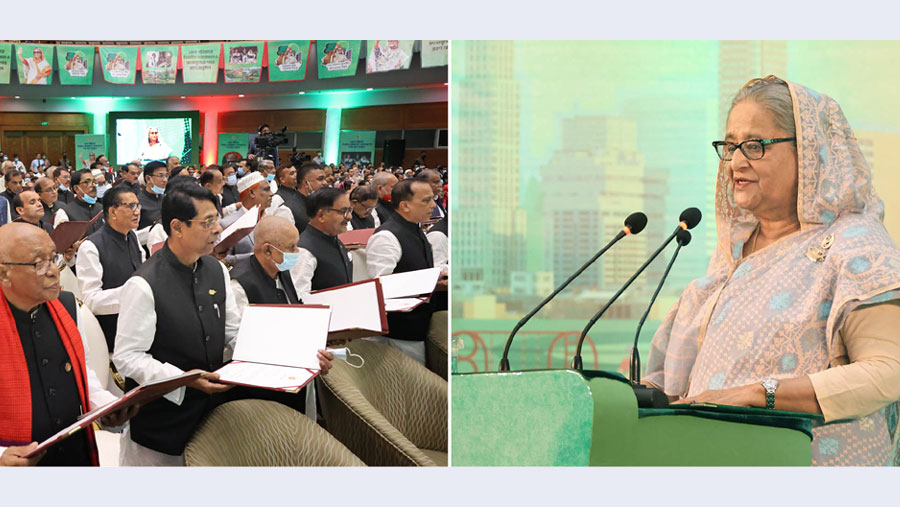 Prime Minister Sheikh Hasina on Monday (Nov 14) heavily castigated the criticism over the reserve, saying her government would not sit idle with the reserve money rather to use it for the people's welfare.

"It would not be proper to sit idle with the reserve money. We have to utilise it for people's welfare... We have to reduce sufferings of the people," she said.

A total of 623 members of the district council also took oath at the programme, local media reported.

The PM asked the local government representatives to take prompt measures to make their localities self-reliant in food production by ensuring ever inch of land to be brought under cultivation.

She also asked them to clean their localities as the Dengue patients are increasing across the country.

The premier too called for making people aware about Dengue.

She said her government is working to make local government bodies as pro-people.

Sheikh Hasina said the price of everything and the transportation costs have increased worldwide due to the Russia-Ukraine war, sanctions, counter sanctions and the Covid-19 pandemic.

The PM said the government is importing necessary things to make those available and ease sufferings of the common people.

She said her government is purchasing food, fuel oil, gas, edible oil, wheat and corn at much higher price using the reserve.

The reserve money is also used in purchasing capital machineries, she added.

The premier said communication, transportation, import and everything was almost stalled during the coronavirus pandemic, for which, the reserve money increased to almost USD 48 billion.

She said that the government has invested USD eight billion in various purposes including infrastructural development and river dredging.

The premier said they have given loan from the reserve to Bangladesh Biman to purchase planes and they are now repaying it with 2 percent interest.

The PM heavily criticised the BNP leaders for their propaganda regarding the reserve money.

She added that they (BNP) will definitely do it as their leader Tarique Rahman is sentenced to seven years imprisonment with TK 20 crore penalty in a money laundering case.

Sheikh Hasina said the government is giving stimulus package to the export oriented industries to continue rolling out their activities.

She said the government is also supplying essential items at lower price through the one crore TCB card, while 50 lakh people are getting rice at the rate of Tk 15 per kilogram.

"Those who are totally incapable to purchase essential things, we are providing them foods free of cost," she said.

State Minister of the Local Government, Rural Development and Cooperatives Swapan Bhattacharjee was present on the dias while Local Government Division Secretary Muhammad Ibrahim gave the address of welcome.

The PM urged the local government representatives to win hearts of the people by rendering required services and stand by them in their needs.

Sheikh Hasina also called upon them to give special focus on the overall development of their respective areas with the mentality of providing service.

Recalling the steps of the Father of the Nation for decentralisation of power, the premier said the great leader had upgraded all the subdivisions to districts.

In light of the initiatives of Bangabandhu, she said the government is working to fulfill all the basic needs of the people, including healthcare, education, housing, food and clothes.

She mentioned that steps have been taken to ensure food security for all and the government is working to provide housing to every homeless person.

She directed the chairmen, members and representatives of other local government bodies to find out whether anyone is homeless in their localities and come forward to help them get houses.

Sheikh Hasina said the Awami League government has created scopes for all the elected representatives to work for the development of their respective areas.

The premier said the incumbent government is working to reach the cherished goal of making hunger and poverty free 'Sonar Bangla' as dreamt by Father of the Nation Bangabandhu Sheikh Mujibur Rahman.

She said your responsibilities have increased as the people made you their representatives through votes.

She also said all the elections including the local government bodies are being held in a free and fair manner.

"You all have to think about the way of developing the fate of the countrymen. My request to you is to serve the people as you are not elected to enjoy luxury," she said.

She said that the elected representatives can remain in the heart of the people by their service. "Or, you can say good bye (to politics) by looting people's properties," she added.