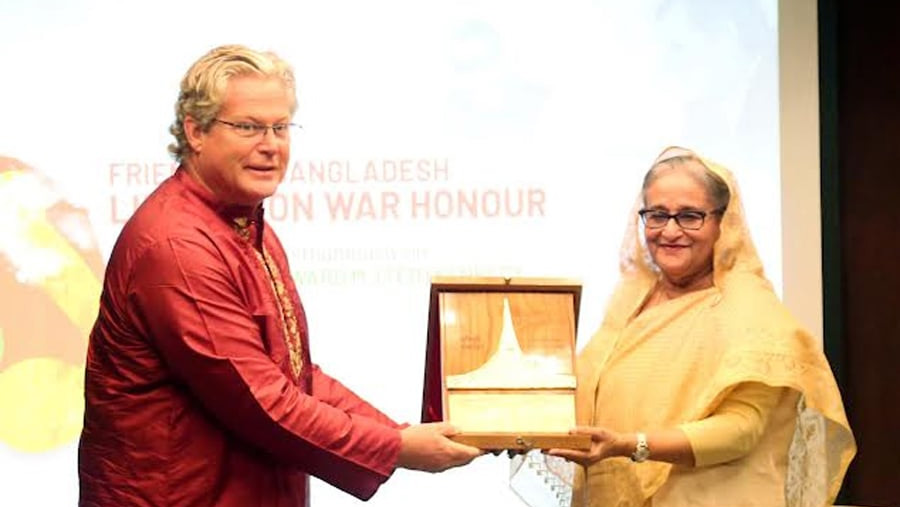 "Today I am highly delighted to hand over the ‘Friends of Liberation War Honour’ conferred posthumously on Edward M Kennedy Sr to his able son Edward M Ted Kennedy Jr," she told a dinner hosted in honour of Ted Kennedy Jr and his family members at a city hotel in the evening, local media reported.

The premier said, "I recall with gratitude the great contributions of late senator Edward M Kennedy Sr to our Liberation War".

She added Kennedy Sr took bold stand against the genocide committed by Pakistan on innocent Bangalees despite the US government role against Bangladesh.

The premier said Kennedy Sr also criticized the US policy to supply arms to Pakistan and boldly called to stop American military and economic aid to Pakistan till end of the war.

During the meeting, she recalled the visit of Kennedy Sr to Bangladesh in February, 1972 and said that he also raised his voice and drummed up public opinions in the USA in support to Bangladesh's Liberation War.

Ted Kennedy Jr, a former member of Connecticut State Senate, is now on seven-day visit to Bangladesh from Oct 29-Nov 5 to join the yearlong celebration of the 50th anniversary of US-Bangladesh relations.