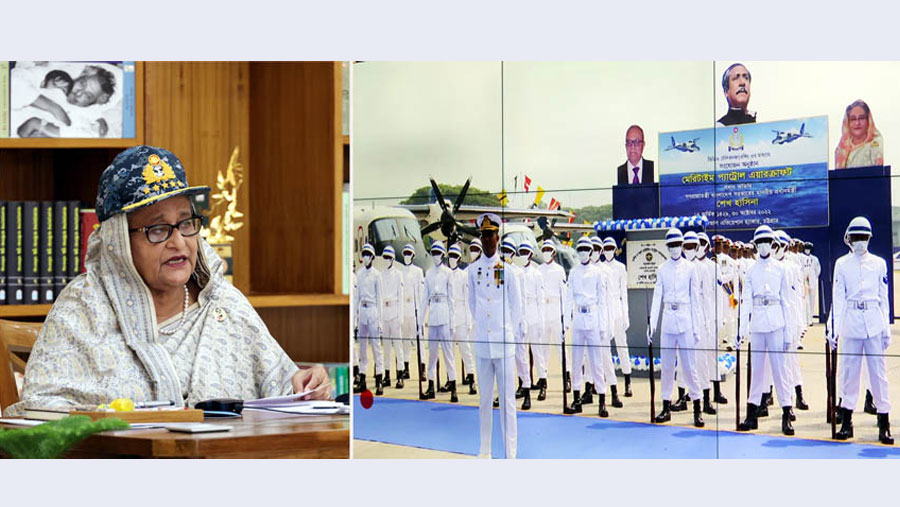 Prime Minister Sheikh Hasina on Sunday (Oct 30) said her government is building each force as capable to protect the country's independence and sovereignty.

"We don't want war, we want peace. But, we should achieve capability to protect the country from external attack, so we can defend our independence, sovereignty. We are preparing all the forces as efficient keeping that in mind," she said.

The PM said this while commissioning two new maritime petrol aircrafts (MPA-8322 and MPA-8327) to the aviation fleet of the Bangladesh Navy at a programme held at the Naval Aviation Hangar, Patenga, Chattogram, joining virtually from her official Ganabhaban residence in Dhaka, local media reported.

Sheikh Hasina said the capability of the naval aviation of Bangladesh increased for inducting two more maritime petrol aircrafts with the existing two.

"Bangladesh Navy can take prompt measures to secure the maritime boundary," she said.

The PM said they have a target to use the vast maritime resources for the country's socio-economic development. So, it is required to build navy as a competent force, she said.

"We have built our navy as a three-dimensional force as we have to protect the sea and the sky over it to make the security foolproof," she said.

The premier said her government is implementing several plans to strengthen the Bangladesh Navy further in line with Forces Goal-2030.

“We are building special harbors to ensure security of the sea," she said.

Chief of Naval Staff Admiral M Shaheen Iqbal gave the vote of thanks. A short video clip on Naval Aviation was screened at the programme.

Sheikh Hasina said her government is building the armed forces based on the "Forces Goal-2030" in line with the 1974's defence policy formulated by Father of the Nation Bangabandhu Sheikh Mujibur Rahman as he had a plan to build the forces as competent.

She said that they have also inducted two submarines – 'BNS Navajatra' and 'BNS Joyjatra' in 2017. The PM said the work is underway to build a permanent submarine base with modern basin facilities.

She also said the construction work of 'Sher-e-Bangla Base' has progressed a lot to enhance the operational and communication facilities of the naval vessels in the coastal areas of southwestern Bangladesh.

The premier greeted the navy personnel for their role during various natural and man-made disasters like flood and fire.

"Our Navy personnel are constantly ensuring the overall security of the maritime areas by facing many natural challenges, which deserves appreciation," she added.

She said her government is working tirelessly for socioeconomic development of the country.

"We have been able to make Bangladesh a developing country," she said, adding that Bangladesh is now becoming the role model of development in the world.

The PM said the impact of coronavirus and Ukraine-Russia war has hit Bangladesh as elsewhere across the globe and it has slowed down the pace of the development.

Not only Bangladesh, the developed countries are also suffering a lot, she added.

"But, we are, with our own resources, land and manpower, keeping the country protected," she said.

The premier asked all to concentrate on increasing food production with using whatever land they have.

The impact of the worldwide economic recession has an effect on Bangladesh but it is trying to get rid of the impact, she added.