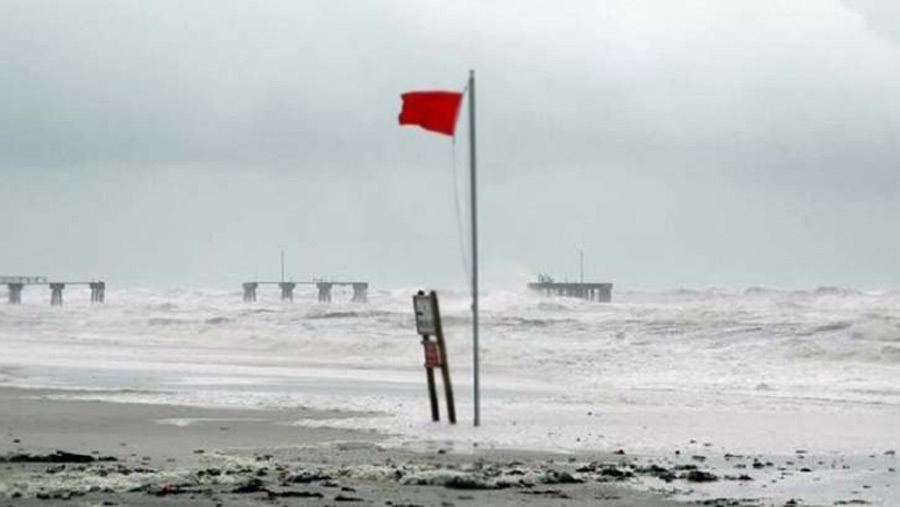 It said the Sitrang also weakened rapidly into a depression by giving precipitation and now lies over Dhaka-Cumilla-Brahmanbaria and adjoining area as a land depression and steep pressure gradient persists over north bay.

Maritime ports of Mongla, Payra and Chattogram have been advised to lower danger signal no. 7 (seven) and also advised to hoist local cautionary signal no. 3 (three), the bulletin said.

Maritime port of Cox's Bazar has been advised to lower danger signal no. 6 (six), and instead advised to hoist local cautionary signal no. 3 (three).

All fishing boats and trawlers over north bay and deep sea have been advised to remain in shelter till further notice.

It said no further special weather bulletin will be issued in this series.

Cyclonic storm Sitrang has lost its strength as it made landfall and its centre touched Bangladesh coastline nearly five hours ago around 9pm on Monday.

"Every cyclone starts losing strength after it landfalls and its eye moves over land," he said.

However, over 2.19 lakh people from 15 coastal districts of the country were evacuated until 5 p.m. on Monday.

At least 219,990 people have been taken to cyclone centers in 15 coastal districts by 5 p.m. on Monday, a Disaster Management and Relief Ministry spokesman told National News Agency of Bangladesh on Monday evening.

A joint secretary of the ministry, M Moniruzzaman, added that the evacuation process was underway to minimize human casualties as "we have kept ready 6,925 cyclone centers" expecting the last person exposed to cyclone dangers to take refuge there.

All the educational institutions of Khulna, Barishal and Chittagong divisions will remain closed tomorrow due to cyclone Sitrang.

The Ministry of Education has given instructions to use the educational institutions in the cyclone-affected areas as shelters, according to a press release of the education ministry.

The ministry said classes of the educational institutions which will be used as shelters will be closed until further orders. A total 17 ships of two Maritime Patrol Aircraft (MPA) and two helicopters of Bangladesh Navy have completed all necessary preparations for deployment in Chattogram, Khulna and Mongla naval areas to conduct emergency rescue, relief and medical assistance activities after cyclone 'Sitrang' hits the coastal region.

These ships have already been prepared with relief goods to provide emergency rescue, relief and medical assistance for the cyclone victims as soon as possible, said a press release of Inter Service Public Relation (ISPR) Directorate on Monday evening.

In addition, naval contingents have been kept ready for deployment after the cyclone lashes the coastal areas.

Three airports at Bangladesh's coastal belt in Chattogram, Cox's Bazar and Barishal will remain closed till 12 p.m. on Tuesday due to the inclement weather induced by the cyclone Sitrang.

The Civil Aviation Authority, Bangladesh (CAAB) has decided to shutdown all operation of these three airports from 3 p.m. Monday to 12 p.m. on Tuesday (Oct 25), according to a CAAB press release. The CAAB will review its decision after observing the weather situation, said the release.

State Minister for Disaster Management and Relief Dr Md Enamur Rahman has said directives have been given to evacuate people from the vulnerable areas. The Agriculture Ministry has suggested cutting Aman rice, which is 80 percent ripe, to minimise the possible brunt of the approaching cyclonic storm Sitrang. The direction was given along with a set of directives in a preparatory meeting of the ministry on Monday.

Leave of all officers and employees of offices and organisations under the ministry has been canceled and they have been asked to stay in office constantly to face the urgent situation. It suggested opening control rooms at agriculture department offices at district and upazila levels to keep communication round the clock.

Farmers should be given necessary suggestions to take pre-cautionary measures and face the post-cyclone situation.