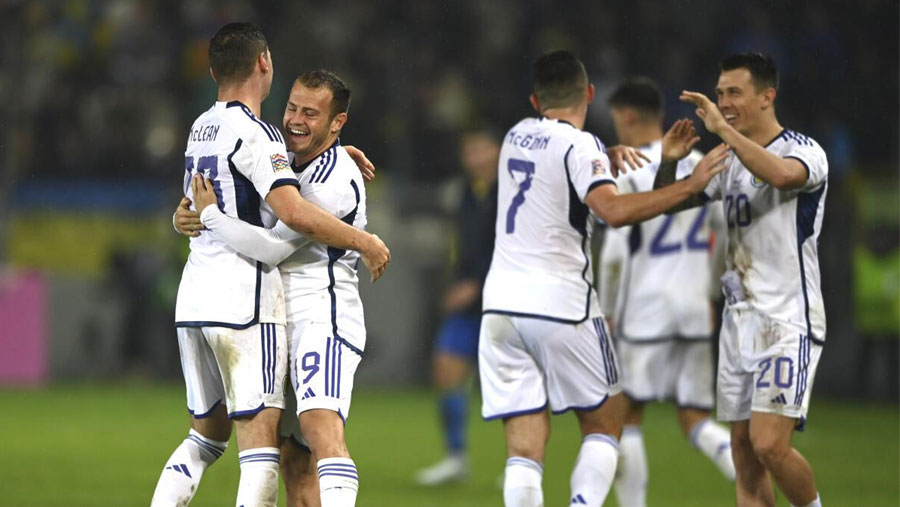 Scotland drew 0-0 away to Ukraine in the Nations League on Tuesday (Sep 27), securing a crucial point that sealed their promotion to the competition’s top tier as the war-torn country hosted their final group game in Poland.

Scotland, who started the inaugural edition of the competition in League C, finished top of League B-Group 1 on 13 points – two ahead of Ukraine.

They had needed to avoid defeat to guarantee their second promotion in three campaigns.

While both teams had chances, the best opportunities fell to Ukraine, with Andriy Yarmolenko firing over the bar from close-range in the eighth minute and Mykhailo Mudryk’s effort saved by keeper Craig Gordon just after the break.

Steve Clarke’s Scotland, who lost a World Cup qualification playoff 3-1 to Ukraine earlier this year, have won four and drawn one of their last six games.

Mitrovic on target for Serbia

Serbia striker Aleksandar Mitrovic netted his 50th international goal as his side outclassed Norway with a 2-0 win to top Nations League B Group 4 on Tuesday and gain promotion to League A.

Serbia finished the campaign on 13 points from six games, three ahead of second-placed Norway, which would have won the group with a draw. Slovenia finished third on six points, with bottom side Sweden relegated to League C on four points.

Norway's Erling Haaland almost got the home side off to a perfect start but his first-time shot after 20 seconds was brilliantly saved by Vanja Milinkovic-Savic, setting the tone for a frustrating evening for the striker.

Dusan Vlahovic gave the visitors the lead in the 42nd minute when Filip Kostic pulled the ball back and the striker fired it through a thicket of legs into the net.

Mitrovic, already Serbia's record scorer, doubled his side's advantage nine minutes into the second half with a typically precise finish from Ivan Ilic's pass, and he almost netted a second with a header in the 76th minute.

Roared on by a packed Ullevaal Stadium, Norway did its best but lacked the guile to break down Serbia until Haaland had another chance late on, but once again Milinkovic-Savic thwarted him.

The Serbs will now meet Bahrain in one final friendly before going on to face Brazil, Cameroon and Switzerland in Group G at the World Cup in Qatar, which Norway missed out on qualifying for.

"We took control of the game and deserved to win. We've got a healthy group here who breathe as a team should," Serbia coach Dragan Stojkovic told Arenasport.

Goalscorer Vlahovic said his side was pleased with the promotion and was now looking forward to more success.

"We're delighted to be in the top tier. We are thriving under Stojkovic and his attacking style," he said.

Two goals in a minute from Remo Freuler and Breel Embolo steered Switzerland to a 2-1 victory over Czech Republic at Kybunpark on Wednesday, a result that relegated the Czechs from Nations League A.

World Cup-bound Switzerland finished third in Group 2 with nine points from its six games, two behind winner Spain, while Czech Republic could only manage four points in the campaign.

Freuler headed Xherdan Shaqiri's cross into the net on 29 minutes and straight from the kickoff Embolo collected a loose pass, ran to the edge of the box and fired a low shot into the bottom corner.

The visitor reduced the deficit before halftime when Patrik Schick scored with a left-footed finish from David Zima's low cross, while later Tomas Soucek saw his penalty saved by Swiss goalkeeper Yann Sommer on a tough night for the visitors, who also struck the frame of the goal on two occasions.