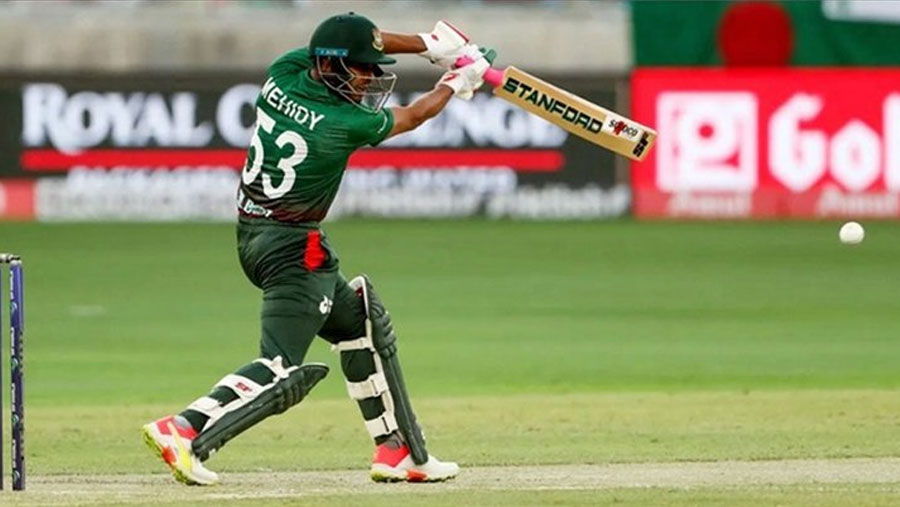 As it was expected, Bangladesh swept the two-match T20 International series against United Arab Emirates (UAE), recording a 32-run win in the second and final game at Dubai International Cricket Stadium on Tuesday (Sep 27).

The Tigers made a slight improvement from the first game as they compiled 169-5 and then bowled in disciplined manner to restrict UAE to 137-5 despite a resistance from captain Chundangapoyil Rizwan who hit his maiden half-century.

Bangladesh scraped through a spirited UAE to win the first game by just 7 runs.

Mehidy Hasan Miraz who opened the innings was the highest scorer for the side with his career-best 46. As has been the case, all of the batters got a start but simply couldn't convert it to a big knock.

Mosaddek Hossain Saikat added 27 while Yasir Ali was not out on 21. Captain Nurul Hasan Sohan who hit six in the last ball was also unbeaten on 19.

Sabbir Rahman, the opening partner of Miraz once again disappointed, making just 12. After Bangladesh were asked to bat first, Sabbir smote one four and one six to indicate a good start on a placid deck but Aryan Lakra had him leg-before to break through for the side.

Like the first match, Liton Das also experienced a soft dismissal, being out on 25 off 20, an innings laced with four fours.

Afif Hossain who top-scored the side in the first game, raised a prospect of another big knock but after getting completely set, he paid the price of a rash shot to be out on 18 off 10.

Mosaddek then took the anchor role to drive the side to the safety. His innings was pivotal in accelerating the run rate at the middle overs.

Even though he got out in the death overs, Yasir and Sohan played their role well amid the surprising pinch-perfect death over bowling of the UAE bowlers.

Aayan Afzak Khan was the pick of the UAE bowlers with 2-33 while Sabir Ali, Aryan Lakra, Karthik Meiyappan claimed one wicket apiece.

Bangladesh's two changes in pace bowling department worked well for them indeed as Taskin Ahmed and Ebadot Hossain gave the side an accuracy what Mustafizur Rahman and Shoriful Islam lacked.

Taskin and Ebadot stifled the UAE innings from the very beginning and that resulted in increasing the asking run-rate alarmingly, which UAE never could overcome despite spirited show from captain Rizwan and Basil Hamid.

The breakthrough came from Nasum who removed Chirag Suri for 5 with a return catch and then Taskin trapped Muhammad Waseem leg-before for 18.

Mosaddek Hossain Saikat then deal a doubt blow, dismissing Aryan Lakra (4) and Vriitya Aravind (2) in consecutive deliveries as UAE were limped to 29-4 in seventh over.

Rizwan and Hameed then shared 90-run partnership for the fifth wicket which only reduced the margin of the defeat.

Hameed scored 42 off 40 with four fours before being dismissed by Ebadot but Rizwan remained not out on 51. His 36-ball-knock was studded by two fours and as many sixes.

For Bangladesh bowlers, Mosaddek took 2-8 while Taskin, Ebadot and Nasum snapped up one wicket apiece.

The Tigers will return to country on Wednesday (Sep 28) and then on Thursday night they will leave the country again for tri-nation series in New Zealand and T20 World Cup in Australia.