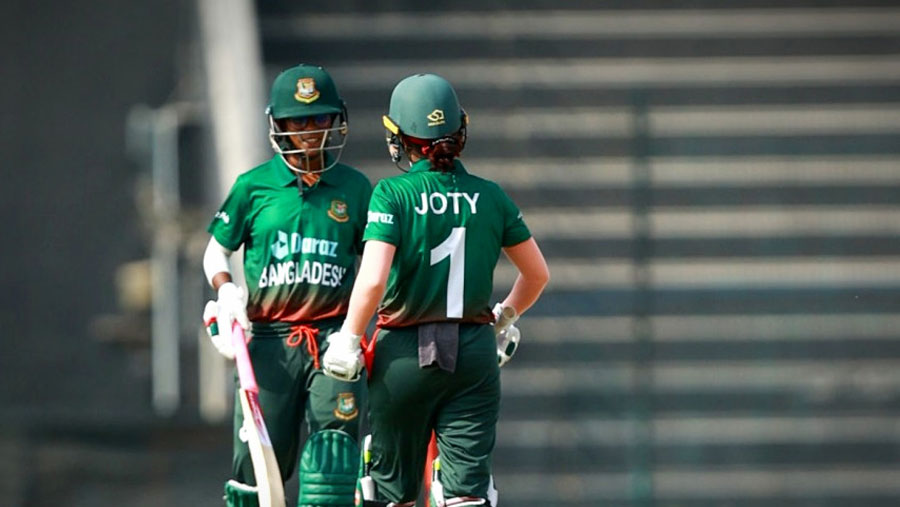 Having won the game, the Tigresses maintained all win record in the group A-they beat Ireland by 14 runs in the first match and crushed Scotland by six wickets in the second match.

Bangladesh and Ireland moved to the semifinals from Group A after being champions and runners-up respectively.

Murshida and Joty put on 138-run for the undefeated second wicket stand, which steered Bangladesh to 158-1 after opting to bat first.

Murshida was also the part of the previous record for second wicket along with Fargana Haque Pinky. They shared 78-run against Scotland in January this year in Kuala Lumpur.

Murshida who was adjudged player of the match, was unbeaten on 77. She played just 64 balls for here knock which included nine boundaries.

Captain Joty was not out on 56 off 40, having blasted six fours and one six. Opener Shamima Sultana was the only batter to be out on 10.

Murshida and Joty paced the innings after the fall of Shamima and put Bangladesh in a position of dominance.

USA's Snigdha Paul was the only bowler to give Bangladesh batters some torrid period as she finished with 1-24 in four overs.

Chasing the winning target of 159, USA were stifled by the disciplined bowling attack of Bangladeshi bowlers. They eventually were restricted to 103-3 in 20 overs with captain Sindhu Sriharsha making the highest 74 not out. Lisa Ramjit was the other notable scorer with 26 not out.

In an important match 10 of the ICC Women’s T20 World Cup Qualifier 2022, Ireland sealed a place in the Qualifier playoffs with a 19-run win over Scotland at the Tolerance Oval.

Opting to bat first, Gaby Lewis started off all guns blazing for Ireland, racing to 28 off 14 balls before she lost her opening partner Amy Hunter. Lewis, though, carried on for Ireland, smashing 66 off 37 balls to give Ireland a strong platform. She was dismissed in the 12th over, when Ireland had already edged close to the three-figure mark.

Orla Prendergast remained unbeaten on a 46-ball 55 and skipper Laura Delany made a quickfire 29 to help Ireland post 164, their fifth-highest total in women’s T20Is.

Jane Maguire went on to remove the Scotland openers cheaply to give Ireland a firm upper hand in the contest that would decide the spot in the Qualifier playoff.

Sarah Bryce rebuilt for Scotland, but by the time she departed for a well-made 49, Scotland had too high a required run rate to scale. They eventually made 145/8, falling short by 19 runs as Ireland went through to the Qualifier playoffs.

The top two teams will seal their berth in the main event, which will be played in South Africa in February and March 2023.