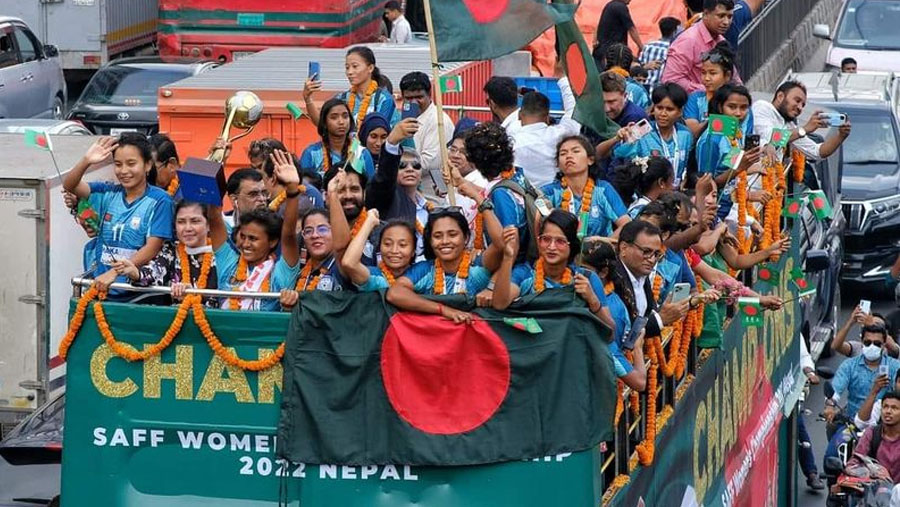 Thousands of football supporters also gathered around the airport to welcome the Tigresses, who made history by claiming the South Asian football's supremacy winning the SAFF title, beating hosts Nepal by 3-1 in the final on Monday (Sep 19) evening.

Bangladesh Road Transport Corporation (BRTC), the government's transport agency, and Bangladesh Football Federation (BFF) have prepared an open-top bus for the homecoming women's football team. The bus will be taking the champions from the Airport to BFF Bhaban.

The bus will be arriving at BFF Bhaban after passing through from Airport to Kakali, Jahangir Gate, PM Office, Tejgaon, Mouchak, Kakrail via BFF Bhaban where the girls will be welcomed again.

The BFF president Kazi Md. Mohammad Salahuddin will welcome the women's booters at the BFF House after a photo session with the women's football team.

India had won the title in all the last five editions of the SAFF. This time, the football tournament of the South Asian region saw new champions through the girls of Bangladesh.

The girls who made the nation proud by winning the SAFF title started the SAFF tournament campaign with high hopes as they blanked the Maldives by 3-0 in their group opening match and thrashed Pakistan 6-0 in their second match.

Bangladesh then defeated five times SAFF Champions India by 3-0 goals to book their spot in the semifinal as the group A champions.

Sabina Khatun & Co. confirmed their spot in the final after crushing Bhutan by 8-0 in the first semifinal.