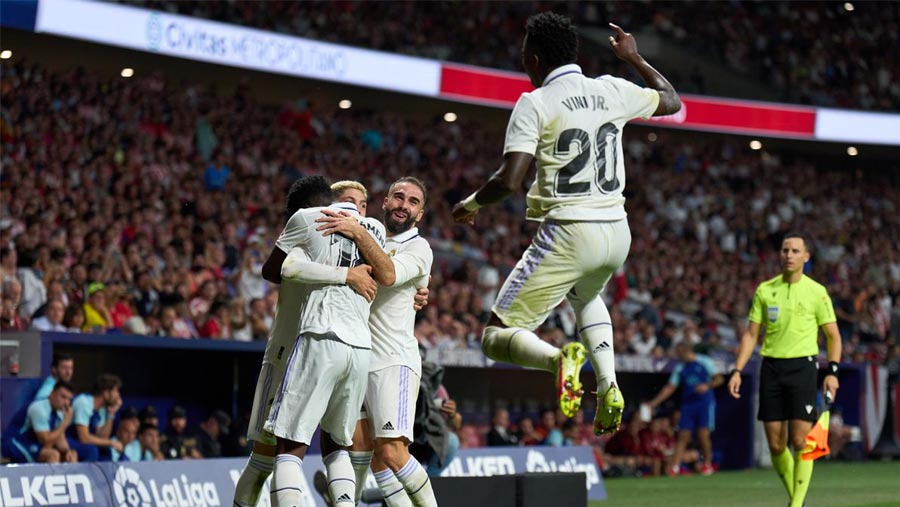 Rodrygo and Federico Valverde scored to earn Real Madrid a 2-1 win over neighbours Atletico Madrid in a heated derby on Sunday (Sep 18) a return to the top of LaLiga. Carlo Ancelotti's side have started their title defence in perfect fashion, with a 100 percent record from six games. This victory took Real two points above FC Barcelona, who had leapfrogged into first on Saturday.

Real Madrid beat Atletico Madrid in a lively derby to make it six wins from six at the start of their LaLiga title defence.

Rodrygo gave Real the opener with a half-volley from Aurelien Tchouameni's audacious scooped ball over the top. They doubled their lead when Vinicius Jr's shot hit the post with Federico Valverde scoring the rebound.

Mario Hermoso briefly gave Atletico hope with a goal but then all but removed it with a late red card.

The substitute scored with his shoulder with seven minutes to go after Thibaut Courtois had missed a corner from Antoine Griezmann, making his first start of the season for Atletico.

But Hermoso was shown a yellow card for pushing Dani Carvajal and two minutes later picked up a second for shoving Dani Ceballos as they waited for a Griezmann corner.

However, the fixture was marred by what appeared to be racist chants aimed at Real's Brazilian forward Vinicius outside the stadium beforehand, which followed criticism of his dancing goal celebrations and a debate over whether that criticism was racist.

Some fans also reportedly threw objects at Vinicius after a Real goal and aimed further songs at him in the closing stages.

Carlo Ancelotti's Real have won all six games, putting them two points clear of FC Barcelona at the top. Atletico are seventh.