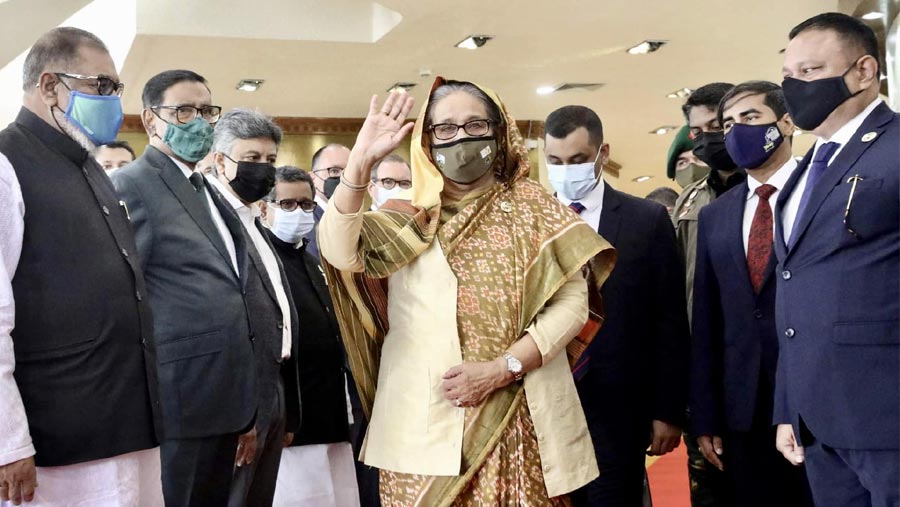 Prime Minister Sheikh Hasina left Dhaka on Thursday (Sep 15) morning for an official tour to the United Kingdom and the United States to join the funeral of Queen Elizabeth II and the 77th Session of the United Nations General Assembly (UNGA).

A VVIP chartered flight of Biman Bangladesh Airlines carrying the PM and her entourage members departed the Hazrat Shahjalal International Airport, Dhaka at 10.35 a.m. The flight is scheduled to reach London Stansted International Airport at 16.45 hours where she will be received by High Commissioner of Bangladesh to the United Kingdom Saida Muna Tasneem, local media reported.

On Sep 17, Sir Keir Starmer, Leader of the Opposition and Leader of the Labour Party will pay a call on her at place of residence.

Besides, the premier will attend the reception programme for the Head of the States/Head of the Governments hosted by the King of the UK at Buckingham Palace on Sep 18.

On Sep 19, she will attend the state funeral of the late Queen Elizabeth II at Westminster Abbey. In the evening, the PM is scheduled to depart London for New York by the Special Flight of Biman Bangladesh Airlines.

On Sep 20, Sheikh Hasina is scheduled to attend a reception meeting hosted by UN Secretary General Antonio Guterres and join the inaugural ceremony of 77th session of UNGA. She will have bilateral meetings with Filippo Grandi of UNHCR and Slovenian President Borut Pahor. She will also join the UNGA Platform of Women Leaders.

At the end of the day, she will attend the reception of US President Joe Biden. Besides, she will join a high-level side event on sustainable housing co-hosted by Bangladesh, Botswana, Slovak Republic and UN Habitat on Sep 21.

On the same day, she will have a bilateral meeting with WEF Executive Director Professor Schwab Klaus and join the Global Crisis Response Group (GCRG) Champions' Meeting.

In the afternoon, the PM will visit the photo exhibition on the Padma Bridge at UNHQs followed by bilateral meeting with Kosovo President Dr Vjosa Osmani-Sadriu, Ecuador President Guillermo Lasso Mendoza and Rabab Fatima, USG OHRLLS.

The PM will start Sep 22 through a breakfast meeting on antimicrobial resistance (AMR) followed by a courtesy call on by IOM Director General Antonio Vitorino. She will also join a high level policy roundtable with the US Bangladesh business council.

On Sep 23, the PM will deliver her address at the General Debate of the 77th Session of the UN General Assembly.

Besides, she will join a civic reception by the expatriate Bangladeshis on Sep 24.