Govt wants all political parties to join next election: PM 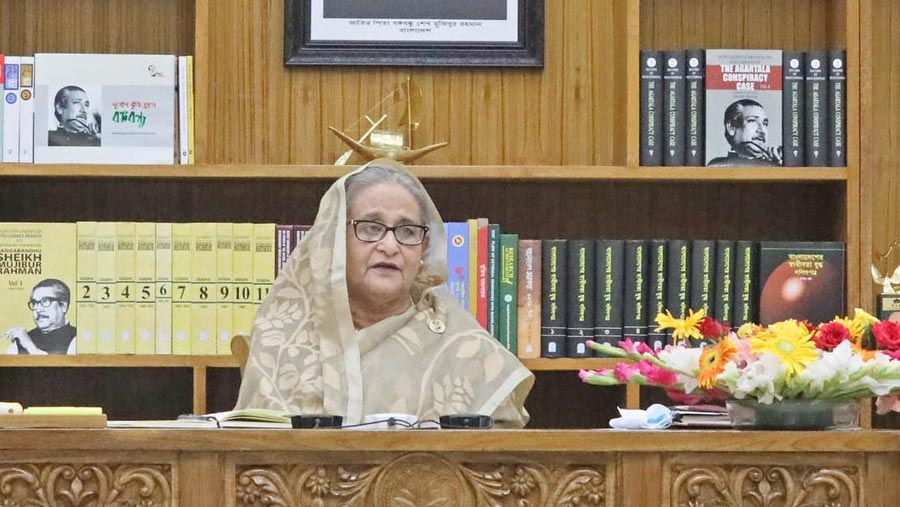 Prime Minister Sheikh Hasina on Wednesday (Sep 14) said her government wants participation of all the political parties in the upcoming general election and believes that countrymen would vote for the Awami League again if they want continuation of the ongoing development.

“We want all the political parties to take part in the next general election. If any party decides not to participate in the polls, it’s their matter. For that reason, we can’t stop the operation of our constitution. As part of the constitution, the election will be held to continue the democratic process,” she said.

She said this as a journalist quested her whether the Awami League would participate in the next election with the existing alliance or not, during a press conference at the Prime Minister’s official Ganabhaban residence about the outcome of her recently concluded four-day official visit to India, local media reported.

Sheikh Hasina said that more than one year is still left to hold the next general election, time will tell which party will form an alliance with whom, adding, “But, we have no objection, if the political parties which are now in our alliance want to stay with us.”

Briefly describing the Awami League government’s measures to ensure overall socio-economic development of the country which helped transform Bangladesh into a developing nation from a least developed one, Sheikh Hasina, said that she believed that the people of the country would vote for her party again.

“I believe the people of the country will vote for the Awami League in the next general election if they want to see the continuation of the country’s development. If otherwise, there is nothing to do,” she said.

Sheikh Hasina said her government has developed Bangladesh in all the areas, including economy, trade and commerce and employment generation.

The PM said they transformed Bangladesh into a developing nation and a self-reliant country in food production and made the northern part of the country Monga-free in the last 13 years which has been possible because of the timely and well thought-out ideas of her government.

She said her government is now giving home to the homeless free of cost as her government’s top priority is to give all, particularly the grassroots people, a worthy life and bring them to the mainstream to expedite the country’s advancements.

Referring to mega projects, including Padma Bridge, Karnaphuli Tunnel and Rooppur Nuclear Power Plant, she said her government has been working to make Bangladesh a developed and prosperous country as envisioned by the Father of the Nation.

The premier said her government has reduced the poverty rate to 20 percent from 40 percent, increased the GDP rate to over 8 percent with timely initiatives, adding that the efforts are being hampered due to the ongoing Coronavirus pandemic and the Russia-Ukraine war, sanctions and counter sanctions.

If the war and sanctions and counter sanctions are not stopped, the world would face dire consequences, including famine, she said, reiterating her call to the countrymen to grow their own food as part of the preparation to ward off the imminent crisis.

Replying to a query, the premier said that she has received much more sincerity from the Indian site during her recent visit to the country.

Mentioning that India is always sincere regarding Bangladesh issues, she said that during the War of Liberation in 1971 all political parties of that country became united in favour of Bangladesh, while they also unanimously passed the land boundary bill in their parliament for enclave exchange.

She, however, said that when the two countries are close neighbors, it's realistic that there may be some differences over many issues but all of those would be possible to solve through discussions.

“I always think all the issues can be resolved through discussions,” she added.

Referring to the rail connectivity which was stopped during the India-Pakistan war in 1965, Sheikh Hasina said rail communication in those routes are being reinstated one after another to bring dynamism in the economic activities of the people in those areas.

“If you become a good friend, then all will be alright,” she said, mentioning the foreign policy of Bangladesh – “Friendship to all, malice to none”.

The PM again referred to the win of maritime boundaries from India and Myanmar, saying that Bangladesh has won, through the international court, the maritime boundary of Bay of Bengal from the neighboring countries maintaining friendly relations.

“We went to the international court, but no crack developed in friendship (neighboring countries),” she added.

Answering another question related to money laundering through mobile financial services, the head of government said that as the issues were taken under surveillance, people would be able to know it.

She said that there are some issues of money laundering (personal involvement) which she doubts whether the media will publish or not, adding that an investigation is going on about the money laundering.

“I will see whether you (media) will write it,” she said.

Sheikh Hasina also said that they have sought a list of money launderers to the Swiss banks, but they did not send any information.

She said they are taking sufficient measures to stop the money laundering.

Regarding the dollar crisis, the premier said it’s not only a problem of Bangladesh but also all over the world, which appeared due to the Russia-Ukraine war and western sanctions.

She added, during the time of Covid-19 pandemic there was no expenditure, and therefore, the reserve of forex went high but after that when import of capital machineries took place the forex reserve declined due to expenditure.

On the other hand, she continued, when Bangladesh takes loan from any source, it always repays it timely as the country never defaults. “So, it might put some pressure on forex.”

She went on saying that some underhand playing on dollars started in the country, but it was monitored accordingly and that is why the dollar situation has been brought to a stable position.

Mentioning that the crisis (on dollar) has appeared due to the international situation, she questioned “How much responsibility do we have here?”

The PM said the question what had Bangladesh achieved from her recent visit to India is a relative one.

Referring to signing of seven MoUs that included withdrawal of 153 cusec water from Kushiara river by Bangladesh and free transit for transportation of goods, she said, "India has been assisting us all the time as a friendly country. It can be said, we have not returned empty-handed." she said.

The premier said the BNP leaders are making criticisms on what the country achieved from India after her recent visit.

She questioned what they were able to get from India during their regime and said their leader and then Prime Minister Khaleda Zia said during visit to India had forgotten to discuss the Ganges water sharing issue.

The premier said her government had stroke a 30-year deal for sharing of the Ganges river water.

BNP only gave India, but failed to obtain anything from them, she said, adding that the military dictator Ziaur Rahman withdrew the import taxes from all the Indian products when Zia was in power and for that reason the market of Bangladesh was flooded with Indian goods overnight.

Sheikh Hasina said the people of the country could not realize what happened after killing of Father of the Nation Bangabandhu Sheikh Mujibur Rahman on Aug 15 in 1975, as for the last three consecutive terms the Awami League is running the country following the democratic process.

About Rohingya issue, she said she sought cooperation from India over the matter and India itself wants to see the issue to be resolved as the forcibly displaced Myanmar nationals are becoming a huge burden for Bangladesh and posing a great threat to its security and environment.

Replying to a question about Father of the Nation Bangabandhu Sheikh Mujibur Rahman's biopic, "Mujib: The Making of a Nation" directed by eminent Indian filmmaker Shyam Benegal, she said the film was unveiled in the Cannes Film Festival and it was evident that the film is made accordingly.

She said the actors and actresses have worked hard in the film, adding that it is very difficult to portray Bangabandhu precisely.